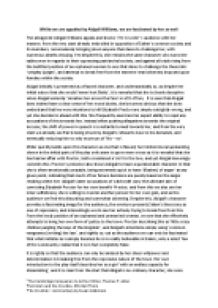 'Whilst we are appalled by Abigail Williams, we are fascinated by her as well'. Discuss

﻿Whilst we are appalled by Abigail Williams, we are fascinated by her as well The antagonist Abigail Williams appals and shocks ?The Crucible??s audience with her manner, from the very start already embroiled in opposition of Salem?s common society and its members, remorselessly bringing down anyone that dares to challenge her, with numerous deaths ensuing. Yet despite this, she remains the same character who turns the tables over in regards to their supressing patriarchal society, and against all odds rising from the belittled position of an orphaned woman to one that dares to challenge the theocratic ?weighty judges?, and attempt to break free from the extreme restrictiveness imposed upon females within the society. Abigail initially is presented as a flawed character, and understandably so, as despite her initial outcry that she would ?never hurt Betty?, it is revealed that she is clearly deceptive when Abigail violently ?smashes her across the face? in a fit of fury. It is seen that Abigail does indeed have a clear sense of her moral duties, she becomes obvious that she does understand that her very intentions to kill Elizabeth Proctor are simply outrightly wrong, and yet she decides to ahead with this. She frequently exercises her expert ability to repel any accusations of this towards her, instead often pushing allegations towards the original accuser; the shift of power in speech is constantly turned towards her, and from the very start we already see Parris being struck by Abigail?s refusal to bow to his demands, and eventually reducing him to only murmurs of ?No?no?. ...read more.

In this way Miller introduces the theme of duality, the two sides of morality within Abigail which presents the audience with a sense of fascination. She is portrayed negatively frequently, notably when she accuses the very person that grants her own wishes, Tituba, as the easiest target, and clearly is ruthless in using other characters for her own benefit; initially she simply wishes for Elizabeth Proctor to be got rid of, and John for herself, while the other girls are simply presented by Miller as relatively weak in comparison to her. This falsification further develops as she realises that this would not be an easy task; she sets herself a precedent to accuse further citizens such as Sarah Good who are on the lower rungs of society, before finally setting her eyes on Elizabeth as the ultimate target, as Proctor confesses to the court that she simply ?thinks to dance with (Proctor) on (Elizabeth?s) grave?, rather than simply playing ?the role of (a) meek serving girl 3?. The audience is able to sympathise with her from the fact that she, similar to audiences? assumed train of thought that her motives are simply based on the fact that Puritanism meant that ?underneath they were all depraved (from) universal human feelings?1. We see that underneath her web of lies and accusations, we cannot help but also feel somewhat sorrowful for her in that she laments herself being orphaned after her parents were ?[smashed]?on ...read more.

kill John Proctor?s wife, transforms the growing tension into an outburst of hysteria followed by accusations, before eventually several are arrested or even hung for their ?crimes?, while she continues to grow in her social standing. On the other hand the audience is also made aware of her background on her becoming an orphan, as well as Parris being an uncaring uncle and parent towards her, and therefore we must feel some sympathy for her in that she lives in a society that is in reality extremely repressive. Despite all of this repression she is able to challenge the status quo regarding the position of women, she realises her own ?pure elements? as Proctor acts as her own ?crucible? in showing her the falsifications of Puritanism; she is the first that finally takes action in raising the position of women, and indeed it is the group of girls as well as Mrs Putnam who make up the bulk of accusations. As the audience, we are also fascinated by her sheer willpower and determination- whilst being remorseless and murderous makes us detest her, it also serves as a testimony to her strength and empowerment, as well as wonder in that she is surprisingly able to succeed in doing so, proving her character to be one of fascination despite disgust. 1 The Cambridge Companion to Arthur Miller, Thomas P. Adler 2Feminism and the Crucible, Mitchell Thom 3The Crucible ? commentary by Susan Abbotson ...read more.