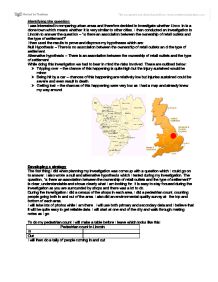 A study to investigate whether Lincoln is a clone town

We can see that clothing and other have the most shops. Other has a wider gap with 30 independently owned and 18 chain, however, clothing has a much smaller gap with 20 independent and 27 chain. There are much fewer of the shops such as electronics/IT and travel agents. There is also a difference in gaps with travel agents having 1 independent and 1 chain, however, electronics/IT has 0 independent and 8 chain. Presenting a summary In this investigation I found out that Lincoln is a clone to border town. A clone town is a town where the high street or other major shopping areas are significantly dominated by chain stores. I also found, by using the chi squared test, that there is an association in Lincoln between the ownership of retail outlets and the type of settlement. If I was doing this investigation again I might expand it by looking for clusters of chain stores in certain areas and doing a nearest neighbour experiment. I might also look at a larger area and split in into more areas. I would also be more careful with the choices of whether it is a chain store as people have different opinions on what can be classed as a chain store and how many there have to be of the shop before it stops being independent. Overall I think this investigation went rather well and I was happy with my results. ...read more.