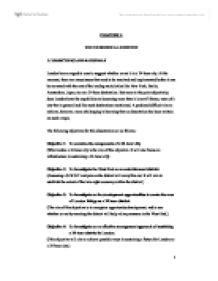 Examine the components of a 24-hour city

CHAPTER 1: THE THEORTICAL CONTEXT 1.1 OBJECTIVES AND RATIONALE London has an arguable case to suggest whether or not it is a 24-hour city. At the moment, there are many issues that need to be resolved and implemented before it can be crowned with the rest of the leading world cities like New York, Berlin, Amsterdam, Japan, etc as a 24-hour destination. But more to the point objectively, does London have the capabilities to becoming more than it is now? Hence, more of a city that is generalized like such destinations mentioned. A predicted difficult aim to achieve, however, more challenging in knowing that no dissertation has been written on such a topic. The following objectives for this dissertation are as follows: Objective 1: To examine the components of a 24-hour city (What makes a 24-hour city is the aim of this objective. It will also focus on infrastructure in sustaining a 24-hour city) Objective 2: To investigate the West End as an entertainment district. (Assessing a S.W.O.T analysis on the district will carry this out. It will aim to establish the extent of the late-night economy within the district.) Objective 3: To investigate on the development opportunities to create the area of London Bridge as a 24 hour district. (The aim of this objective is to recognize opportunity development, and to see whether or not by creating the district will help relive pressures in the West-End.) Objective 4: To investigate on an effective management approach of sustaining a 24-hour district in London. (This objective will aim to achieve possible ways in sustaining a future for London as a 24-hour city.) 1.2 HYPOTHESIES The West End has a unique character that attracts a range of people who participate in a variety of activities. The increase of activities in the West End, relates to the demand to be spread, where possible, to other districts in London - such as the area in London Bridge. ...read more.

The concept of urban tourism is of that the activity is participated in urban areas or commonly in cities. With increasing trends that are deriving the late night economy, such as work and lifestyle pattern, and city center living, negative impacts such as anti-social/ criminal behavior, noise, and of course the growing disadvantage of drugs and alcohol are more seen within city center's area's (LGA, 2002). With the mentioned disadvantages, establishing more of London as a 24-hour economy will not only just create more jobs, but will also create possible future tourism for the city, hence, an economic benefit. Urban tourism can also be a form of inner city regeneration. Places or area's of opportunity for development, can be beneficial to not just the visitors, but also to the local residents the importance of culture in a location, is a tool to "re-imaging the city on and international stage" (Lovatt and O'Connor, 1995 P: 129) However, it is arguably to say that the key impacts can be minimized, and benefits generated as whole, but all of which need to be carefully planned. In context, to the impacts that the West-end is currently facing, the increase of participation and levels of demand are beyond the area's capabilities and are over spilling negative impacts (WCC, 2002). Although the area of the West-End is the cities main cultural quarter or late night economy district, it fails to manage and sustain its credibility. As the city's key hotspots not only for the late night economy, but also for being a district that is concentrated with high levels of street crime. An aspect in which can determine the future role and function of London as a 24-hour city. 2.5 Business Improvement Districts (BIDS) The general opinion of the planning system in this country is failing to recognize that time is of an important element. Its holistic approach is very beaucractic fails to manage key issues at hand at local level. ...read more.

Westminster City Council / Southwark Council An interview with a representative who works in the management of the West-End and the area of London-Bridge will help provide valuable information to the extent of the late-night economy in the given areas. Central Cities Institute This is an optional bonus, if a representative from the institute based at the University of Westminster. The aim for this interview would help give an academic overview in the growing possibilities that a 24-hour economy can bring to the city. OTHER QUALITATIVE RESEARCH THAT CAN BE CONDUCTED Still Photography The aid of photography can help to create a clear image to what the West-End is, and what the area of London Bridge can be. Digitally enhanced images with the help of using the software program - Photoshop can create an image of the possible future in the area of London Bridge. CHAPTER 7. CONCLUSION The initial concept of 24-hour cities when first read, had raised the question on "does the government have the capabilities in foreseeing a sustainable world city? The answer was then followed by the many concerns, which are key problems that the city is currently facing. An interesting fact that the study indicates is there are more people in the streets between the times of 4am -5am than during the morning rush hour. The study is also realistic to the fact that transport plays a vital role in the district of the west end. It rules out on the possibilities that the transport network, in particular to the tube will ever become a 24-hour basis, hence, ownership of London Underground. The late night economy concept is very unlikely to be diminished, in comparison to other economies that are in London. Therefore, the importance in sustaining a "world-class city", as the mayor ken Livingston suggests, the government needs to manage the growing trend. In particular at his administration level, and work together with other local agencies. The concept of 24-hour city in London is more of a misnomer and of an 18-20 hour economy. ...read more.