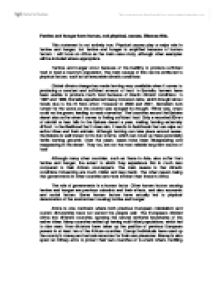 Famine and hunger have human, not physical, causes. Discuss this.

Famine and hunger have human, not physical, causes. Discuss this. This statement is not entirely true. Physical causes play a major role in famine and hunger, but famine and hunger is amplified because of human factors. I will focus on Africa as the main case study, although other examples will be included where appropriate. Famine and hunger occur because of the inability to produce sufficient food to feed a country's population. The main causes of this can be attributed to physical factors, such as unfavourable climatic conditions. Global climate change has made farming very unreliable when it comes to producing a constant and sufficient amount of food. In Somalia, farmers have been unable to produce much food because of drastic climatic conditions. In 1997 and 1998, Somalia experienced heavy monsoon rains, which brought about floods due to the El Nino effect. However in 2000 and 2001, Somalia's luck turned for the worse as the country was ravaged by drought. Either way, crops could not be grown, leading to mass starvation. The countries around the Sahara desert also suffer when it comes to finding sufficient food. Only a recorded 50mm of rainfall or less falls in the Sahara desert a year, making farming extremely difficult. ...read more.

Other countries outside of Africa do suffer from famine and hunger. Russia is one country that has experienced a political change in administration, from that of Communism to Capitalism. Statistics have shown that social factors are not improving - life expectancy has been reduced and there is a higher death rate than before. However, Russia's population does not experience hunger to the extent of African countries, because of the availability of technology and because Russia is more developed. Africa is simply too poor to afford any technological changes in farming. Farmers in Africa are encouraged to buy crop seeds from multinational companies. Although the seeds are high yielding, they are unable to reproduce or propagate. Hence, farmers have to spend more money buying these input-intensive seeds, making the industry extremely unprofitable. Most farmers are unable to afford even the tools needed for a successful growing and harvest season. Some parts of India and Bangladesh suffer from famine because of land fragmentation. Large areas of land are divided up among children and siblings. Every year, the area of land owned by each individual is getting smaller and smaller. Farming is inefficient and the land runs out of nutrients very quickly and crop farming is unable to continue. ...read more.

Secondly, Africa's dependance on international and foreign aid is worsening its plight. Many African countries are only in the second stage of the Demographic Transition Model, and some countries are even going backwards development wise. They more or less fit themselves into Thomas Malthus' model of the unsustainability of increasing population growth on natural resources. However, I believe that it is international aid, in the form of food and medicine, which contributes to Africa's population growth. Were it not for international aid, the population of many of Africa's countries would have decreased accordingly to which the countries' own natural resources would have been able to support, therefore avoiding the food crisis plaguing Africa today. To conclude, famine and hunger are not only cause by human problems, but they also have physical causes behind them. However, the problems in food production caused by physical factors have been magnified by human factors. Countries in Africa and Asia, namely LEDCs, are overwhelmed by the problems brought about by physical causes, as they do not have the money and technology to overcome these causes. However, human causes including social and economic problems have been no help in improving the situation, but have simply worsened it. ...read more.