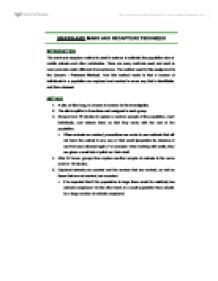 Grassland - The mark and recapture method.

GRASSLAND: MARK AND RECAPTURE TECHNIQUE INTRODUCTION The mark and recapture method is used in science to estimate the population size of mobile animals and other vertebrates. There are many methods used and each is more accurate under different circumstances. The method used in this assignment is the Lincoln - Peterson Method. How this method works is that a number of individuals in a population are captured and marked in some way that is identifiable and then released. METHOD 1. A site, of 60m long, is chosen at random for the investigation. 2. The site is split in to 6 sections and assigned to each group. 3. Groups have 15 minutes to capture a random sample of the population, mark individuals, and release them so that they remix with the rest of the population. * When animals are marked, precautions are made to use methods that will not harm the animal in any way or that would jeopardize its chances of survival once released again. For example: when working with snails, they are given a small dot of polish on their shell. ...read more.

In estimating the size of a population, there is always going to be a level of uncertainty due to examining samples rather than the population as a whole, which in most cases is impossible. To measure this level of uncertainty, Standard Error is calculated by putting the recorded data in the formula below (using the totals): SE = 33 This formula simply measures the amount of error in the estimate. By multiplying the SE times 1.96 you can calculate the approximate confidence (CI) interval for the mark-recapture estimate, which is then added and subtracted from the estimate (N). N ? 1.96 xSE The results show 377 ? 64.9 We could then say that there is a 95% chance that the actual population size is between the upper and lower limit of the confidence interval. The confidence interval is a measure of the estimate precision, not the estimate accuracy. Therefore, the precision of the mark-recapture method is inversely dependent on the number of marked animals. When carrying out statistical analysis on Microsoft Excel, the standard deviation for the population of snails is 28.52 suggesting that the data is unreliable. ...read more.

The reason behind this is that the nettles and crevices in walls, aids as protection against predators like birds, aswell as keeping them protected from the sun. As the second day was dry not as many snails were recaptured, also on day one many on their habitats amongst the nettles were damaged. These factors could be taken into account for future reference by making sure that the mark and recapture take place around the same time of day, with similar weather conditions. This would also make it a fairer test as it limits some variables. There is also a need to try and avoid altering the habitat during sampling There are many limitations of the mark and recapture technique, which are: * It must be carried out under comparable conditions * It is confined to species living in discrete populations inhabiting a definable area. * The Lincoln index assumes that there are no births or deaths whilst sampling therefore does not change the total population. * Estimations of the population tend to be high, especially if there are a low number of individuals recaptured. By using a technique such as Bailey Triple Catch method, which involves multiple capture and recapture techniques could improve and give a more accurate set of results. ...read more.