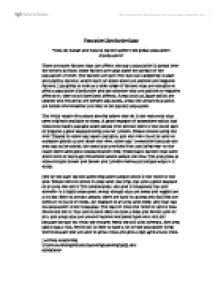 How Do Human and Natural Factors Affect the Global Population Distribution?

Population Distribution-Essay "How do human and natural factors affect the global population distribution?" There are many factors that can affect the way a population is spread over the earth's surface, these factors are what make the spread of the population un-even. The factors are split into two sub categories: human and physical factors, within each of these there are positive and negative factors. I am going to look at a wide range of factors that are thought to affect population distribution and see whether they are positive or negative affects or, they could have both affects. Areas such as Japan which are wealthy and industrial are densely populated, areas like Antarctica which are hostile environments are likely to be sparsely populated. The initial reason for people settling where they do is the resources that were originally available to them. A good example of somewhere which had resources readily available when people first settled there is the south east of England a good example being around London. People settled along the river Thames so there was water available, also the river could be used to transport goods up and down the river, there was `protection because the area was quite woody, the wood also provided fuel also being near to the coast there were good communication links. These basic factors that were there 100's of years ago influenced where people live now. ...read more.

A good climate is that has a regular and even distribution of rain, and also a sufficient temperature to grow crops and for people to survive (so really a climate without extremes). A good example of climate is Australia. Although not a huge country the outback is very sparsely populated but, Sydney is quite highly populated. A long-side climate is vegetation. Areas that have a temperate climate have vegetation that is easy to manage i.e. grassland. An area however like the Amazon or North Canada can be a settlement barrier, has it is hard to clear, and is therefore unsuitable to live in. Resources is another physical factor that can have positive and negative affects on a population. Places like Africa tend to lack natural resources and areas, which do have the resources, tend to lack the money to make use of them. A prime example of an African country like this is Mozambique. On the other hand a country which has both money and resources is likely to have a higher population. You can see when you compare a country like Mozambique with the UK, it is easy to see this on a dot-map. A factor that goes "hand in hand" with resources is water. People need water to survive, areas like Ethiopia that don't have a regular clean water supply will find it hard to sustain a population. ...read more.

The opposite to this is places like the Netherlands where the economy is good, there is a lot of trade, a range of employment and intense industry/farming. Also places where a small amount of land can support many people, making things profitable. Political factors can be similar to economic ones and areas like Brasilia show this. There is a high level of investment so people are more likely to settle there. However, areas like the more inner parts of Brazil (a more closer to home example is Mid-Wales) have a low level of investment and development is not encouraged so people are not likely to settle there. From my research I have found that there are many factors affecting global population distribution. Each factor has its own benefits and forfeits although, with the majority forfeits are outweighed by benefits. Overtime factors that influence population distribution have changed. I can see from my essay that before technological advances one of the most important factors in people deciding where to settle was whether or not the land was in good condition to support the people who were going to live on it, this is a combination of several physical factors. Nowadays distribution ids more likely to be down to human factors such as the better technological advancers and political factors including whether there is a large amount of investment in the land. There are however, a variety of factors that, deep down affect the settlement of people, even in the 21st century these factors are affecting the global population distribution. ...read more.

A good attempt to evaluate the different factors affecting population growth. What lets this essay down is it's lack of detail and comparison when using examples.
4 stars