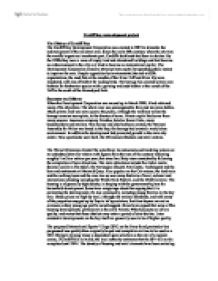 how has cardiff bay been redeveloped

Cardiff bay redevelopment project The History of Cardiff Bay The Cardiff Bay Development Corporation was created in 1987 to stimulate the redevelopment of the run down area. Since the early 20th century, when the city was the world's largest coal merchants port, Cardiff's docklands had been in decline. By the 1980s they were a mass of empty land and abandoned buildings and had become an embarrassment to the city as it tried to become an international capital. The Development Corporation aimed to attract private capital by spending public money to improve the area. Despite opposition by environmentalists and wildlife organisations, the mud flats at the mouths of the River Taff and River Ely were inundated, with loss of habitat for wading birds. The barrage has created several new habitats for freshwater species with a growing wetlands habitat at the mouth of the Taff to the south of the Hamadryad Park. ...read more.

Also popular are the Cat-cruises, the land-train and the walking tours and the area also so sees many festivals of local, national and international standing including the Welsh Food Festival, and the MAS Carnival. The housing is of generally high density, in keeping with the government's plans for brownfield development. Some have misgivings about this arguing that it is preventing the development of a true community, including young families in the bay area. House prices are high by local, although not national standards, and with many of the properties snapped up by 'buy to let' speculators, first time buyers are not as common as they young age profile would suggest. Some have argued that some of the housing developments, particularly in the early Atlantic Wharf projects are of low quality, and worry that these districts may enter a period of slow decline. Later residential developments on the bay itself are generally seen to be of higher quality. ...read more.

Rafting Centre" is scheduled to take place in 2007, at which time the main residential element will commence over a 6 year time-frame. The construction of the two superstores has been criticised by some quarters as 'unwanted and unnecessary', however it can also be argued that both meet an identifiable need; Morrisons, by reducing the dominance of Tesco and Asda on the local grocery market; and Toys-R-Us by replacing the demolished store in the city-centre. The Pierhead Building in Cardiff BayWith the exception of a few historic buildings (the Pierhead building, the Norwegian Church and a warehouse or two), most of the historic quayside areas have been, or will be, lined with new developments including housing, shops, offices, restaurants, a cinema and other leisure facilities, and a new �67 million home for the National Assembly for Wales, designed by Richard Rogers. The bay is also home to the Wales Millennium Centre and is now home to many welsh design and production companies. Making Cardiff Bay a design and media quater. ...read more.