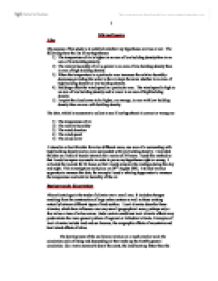 From the map of Osterley below you can see the sheer sparseness of the area, as you can see there are hardly any motorways or major roads visible. These descriptions are essential in my prediction work, as there are number of factors that will affect an urban climate. This investigation is extremely relevant in real life situations, as it tells us a lot about climate in rural and urban areas. From this we can forecast weather for the present and future, and also investigate the climate dangers, as urban areas temperatures carry on to rise, the fatal sun rays can cause skin cancer. In order to prevent this we have to understand the reasons behind the rise in temperatures. What I Expect and Why I expect a majority of my hypothesis to be true. I expect the first part of my hypothesis to be correct because in rural areas, which are areas of low business density, there is not a lot of heat being given off in to the atmosphere due to there being fewer cars and houses than an urban area. There are also a lot of plants in rural areas, such as West Ealing and plants take in a lot of heat from the atmosphere in the form of sunlight; especially, the tall plants such as trees. In urban areas, which have high building density, there are lot more cars and surrounding houses. Cars give off huge amounts of heat through the engine and the exhaust pipes and houses give out heat through windows and doors as well as through the roof. Vast amounts of pollution are exposed to the atmosphere from factories. The smoke, from the factories, acts as an insulator for the heat in the lower atmosphere. This known as a heat island. More heat retaining materials with lower albedo and better radiation absorbing properties. Rougher surfaces with a greater variety of perpendicular slopes facing different aspects. ...read more.

In West Ealing, which has a high building density, there are lot more cars and surrounding houses. Cars give off huge amounts of heat through the engine and the exhaust pipes and houses give out heat through windows and doors as well as through the roof. Vast amounts of pollution are exposed to the atmosphere from factories. The smoke, from the factories, acts as an insulator for the heat in the lower atmosphere, this explains the high temperature range and the low level of humidity. Evaluation In my personal opinion I believe this investigation was a success, in the sense that the results corresponded with my predictions. I do believe that my results were quite accurate, however, there might have been several factors, which could have caused some anomalous results. Such as the ventimeter, moisture would enter leaving the tube dry, which made it difficult for the ball or marker to move up. In order to get around this obstacle I used chemically treated pipe stem cleaner to clean any moisture remaining. Another problem with the investigation I encountered was the fact that I could not be at two places at one time. So I had to instruct another person to take the readings, this can cause the problem of the fact that his reading maybe different from the readings if I took them. So this reduces the idea of one hundred percent accuracy. One way in which this investigation can be taken further is to expand to a bigger area, such as whole countryside against a temperature of a town or city as a whole, or you could investigate the reasons of the high level of temperature in an urban area such as London. I feel this experiment could have been improved by using more automated instruments such as digital whirling phycrometer and ventimeter that you can just read off the readings of a small LCD screen. 1 ...read more.