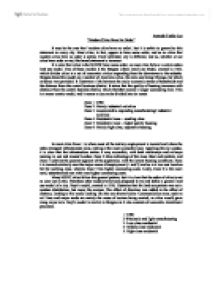 Amanda Teefey Lee "Modern Cities Have No Order" It may be the case that 'modern cities have no order', but it is unfair to generalize this statement to every city. Most cities, in fact, appear to have some order, and so to claim that modern cities have no order is untrue. Each individual city is different, and so, whether or not cities have order or not, this broad statement is incorrect. It is clear that cities in the MEDW have some order, as most cities follow a certain urban land use model. One of those models is the Burgess Urban Land Use Model, created in 1925, which divides cities in a set of concentric circles expanding from the downtown to the suburbs. Burgess based his model on a number of American cities, the main one being Chicago, for which evidence was provided. It illustrates a link between the socio-economic status of households and the distance from the central business district. It states that the quality of housing increases with distance from the central business district, which therefore means a longer commuting time. This is a mono-centric model, and it means a city can be divided into six zones: Zone 1: CBD Zone 2: Mainly industrial activities Zone 3: reconverted to expanding manufacturing/ industrial activities Zone 4: Residential zone - working class Zone 5: Residential zone - higher quality housing Zone 6: Mainly high class, expensive housing. ...read more.

The inner zone is likely to have areas of high quality accommodation, which would be occupied by the wealthy citizens of the city. Much of it is legacy from colonial times when wealthy landowners, traders and administrators inhabited this zone. Moving outwards from the inner zone there is a decrease in the quality of housing, unlike in the developed world where there is an increase. This is due to the creation of shacks by those entering the city. A good example of Amanda Teefey Lee where this is apparent is in Brazil, where there is obvious inward migration to the cities such as Rio de Janeiro and Sao Paulo. Those moving in cannot afford proper accommodation, and so they join many others by building temporary housing from local materials. These are what is known as Shanty towns, and are illegal as it is usually built on unsuitable sites with the dwellers paying no rates or taxes, leading to less money for improvement projects. An example is the Rochina favelas on the hillsides of Rio de Janeiro, but this is an example of a shanty town which has become established, with improvements being made to not only the housing (like building an upstairs), but also to facilities, as buses, schooling, shops and health provisions are now put in place. ...read more.

This is mainly due to the fact that most developing countries were in stages two and three of the Demographic Transition Model, and so natural increase is high, leading to a population 'explosion'. This could be evidence that some modern cities in the LEDW have no order, with an increasing population leading to a sprawl of the city into outskirts, and uncontrollable development. However, it does not apply to all modern cities in the developing world, as some, such as China, have placed policies in order to control population growth, hopefully leading to a control in urban development, hence giving them order. In conclusion, it is clear to see that most modern cities do have order, and so the statement is false. Yes, there are some cities which appear to have no order, but to generalize this to all modern cities in untrue. Cities in the MEDW are clearly more order than those in the developing world, but this does not mean that all cities in the developing world have no order. Many factors contribute to the extent of order found within a city, such as whether it has the wealth to control structure and growth, and whether it has a good infrastructure maintain from when it first urbanized, to present day. ...read more.