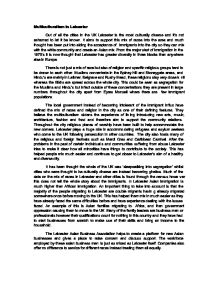 Multiculturalism in Leicester. Out of all the cities in the UK Leicester is the most culturally diverse and its not ashamed to let it be known

Multiculturalism in Leicester Out of all the cities in the UK Leicester is the most culturally diverse and it's not ashamed to let it be known. It aims to support this mix of races into the area and much thought has been put into aiding the acceptance of immigrants into the city so they can mix with the white community and create an Asian mix. From the major start of immigration in the 1970's it is now thought that Leicester has greater diversity in three blocks than anywhere else in Europe. There is not just a mix of race but also of religion and specific religious groups tend to be drawn to each other. Muslims concentrate in the Spiney hill and Stoneygate areas, and Hindu's are mainly in Latimer, Belgrave and Rushy Mead, these religions stay very close knit whereas the Sikhs are spread across the whole city. This could be seen as segregation for the Muslims and Hindu's but infact outside of these concentrations they are present in large numbers throughout the city apart from Eyres Monsell where there are few immigrant populations. ...read more.

It has been thought the whole of the UK was 'sleepwalking into segregation' whilst cities who were thought to be culturally diverse are instead becoming ghettos. Much of the data on the mix of races in Leicester and other cities is found through the census however this does not tell the whole story about the immigrants. In Leicester Asian immigration is much higher than African immigration. An important thing to take into account is that the majority of the people migrating to Leicester are double migrants having already migrated somewhere once before moving to the UK. This has helped them mix in much easier as they have already faced the same difficulties before and have experience dealing with the issues faced. An example of this is Asian families migrating to Africa, and then government oppression causing them to move to the UK. Many of the family leaders are business men or professionals however their qualifications count for nothing in this country and they have had to start businesses from scratch to make use of their skills and bring an income to the household. ...read more.

Leaflets were also given to new arrivals in their native language to help them settle. Whereas the migrants have to adapt to their new circumstances the current population also has to relate to their presence. To help the bonds with these new migrant Leicester started letting candidates come forward from the minority communities for electoral positions. By 2002 Half of the Labour group had councillors from minority groups. A race relations committee was also made of which the leader was a Ugandan refugee. So as shown the mix of races in Leicester is huge and segregation is kept to a minimum. But perhaps most importantly and impressively the minorities have people representing them in government positions which is vital to their integration into the city. Without this representation and involvement in decisions and plans which will affect them mixing would be impossible and the immigrants would be forced into their own communities in which they would leave parallel lives. This is perhaps the key foundation that is needed for multiculturalism and some places like London should take hints from Leicester to make their own multiculturalism succeed. ...read more.