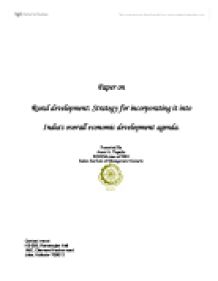 Paper on Rural development: Strategy for incorporating it into India's overall economic development agenda. Presented By Anant A. Tapadia PGDCM class of 2005 Indian Institute of Management Calcutta Contact me at: H3-306, Ramanujan Hall IIMC, Diamond Harbor road Joka, Kolkata- 700012 Email id: [email protected] Phone: 033-34014321 Executive summary The rural economy, as much as urban economy, is an integrated part of the overall Indian economy. Any talk of overall development without rural development is flawed and unsustainable as far as India is concerned. If we consider these as two parts of the overall national structure and try to understand the effects different policies have on them and so on the overall economy (measured by development indicators), we will realize that efforts put in one area will not necessarily mean endangering the other. There is an interrelationship between the rural and urban development and so if we frame our policies properly, invest wisely and utilize resources efficiently then there can be an all round development. There is an imbalance in the way the Indian economy functions presently. The main reason for it is that resources are being transferred from urban economy to rural economy just for short term political motives. This is affecting both areas, not letting rural economy develop on its own and hampering growth and investments in urban economy. A proper planned approach of rural development which will include the Center (having the hold and power to enforce regulatory frameworks), panchayats and key village personals (who enjoy the faith of the village people), NGOs (who have the right intent and deep reach) ...read more.

[5]. But the time lag in getting the returns is more in the first case making it unsuitable for political purposes and so the use and allocation of funds should not be in the hands of the government alone. Who will do it - the Change Agents Now we will discuss the institutes that can and should have a major role to play in the whole change. NGOs: In India there are 12265 NGOs of which 52.75% in Rural Development (RD) [6]. Others cover different areas but directly or indirectly have an affect on the rural population. The core strength that the NGOs will provide to the whole process is there basic intent of social development. These NGOs are very involved as they are generally run by people who have an inner urge to do well and have a single minded motive of social / rural development. The role of NGOs and their capacity in reaching across to large sections of the population and the quality of reach is undoubted. However, in view of the limited organizational, managerial and financial capacities of NGOs, they cannot, in any way supplant the normal government machinery in addressing the various developmental problems of the social sector. Panchayats: These are organizations which enjoy both public support and government help but are restrained because of the resources. Key Village individuals: There are people in every village other than the panchayat committee (surpunchs) ...read more.

So concentrating on urban areas alone will not help and so rural development (affecting the majority population) is directly called for. Secondly if the country has to have a sustainable growth say of 8%GDP for the next 20 years then it should start concentrating on the industrial sector. At present CAGR for agriculture is -5.2%, industry is 6.4 % and for services is 7.1%. For getting a sustainable GDP of 8% the industry will have to grow at 11% (CII) [9]. For industry to grow at that rate it is important that it enters the rural economy in a significant way which is exactly what we have proposed in the current structure. Initially infrastructural development and then industry being set up in rural areas will help both rural development and Industry sector. As the per capita income of rural population increases there spendings will also increase which will provide a market for the whole economy and will have a multiplier effect on the overall GDP. Research has shown that there is a +ve correlation between rural income and sale in sectors like durables, FMCG, two wheelers/tractors & construction. Rise in the rural income can raise the sales in these sectors from 10% to 25% [8]. Also as the villages become self reliant the need of subsidies will decrease and that in turn will reduce the load on other sectors. This will lead to an overall, sustainable and equitable growth. If we unify goals of different development indicators, it will be clear why this is the best solution. ...read more.