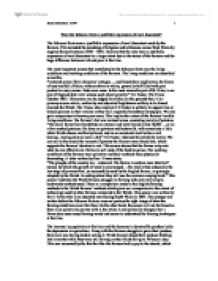 Were the Rebecca Riots a justifiable expression of rural discontent?

Were the Rebecca Riots a justifiable expression of rural discontent? The Rebecca Riots were a justifiable expression of rural discontent made by the farmers. This included the smashing of tollgates and tollhouses across West Wales by angered farmers between 1839 - 1843. I believe that the riots were a justifiable expression of rural discontent to a large extent due to the status of the farmers and the huge difference between rich and poor at the time. The most important reason that contributed to the Rebecca Riots was the living conditions and working conditions of the farmers. The living conditions are described as terrible. "I entered several farm labourers' cottages.....and found them mud hovels, the floors of mud and full of holes, without chairs or tables, generally half filled with peat packed in every corner. Beds were none. In the most miserable part of St. Giles, in no part of England did I ever witness such abject poverty." T.C Foster, The Times October 1843. This source can be judged as reliable on the grounds that, it is a primary source article, written by and educated Englishman unlikely to be biased towards the Welsh. The Times, who employs T.C Foster is unlikely to support lies or biased opinions in their articles as they are a reputable broadsheet newspaper. We also get a comparison to known poor areas. ...read more.

This source is reliable even though it was told by a farmers wife, it was told under oath and recorded so wouldn't have been changed. Mary Thomas was obviously looking out for her own interest, but the source was given under oath so she is unlikely to lie. The farmers desperately tried to stay financially okay as the only financial relief they could get was to go into the workhouse. This was under the poor law amendment act 1834. This was despised as families were split up, people were treated harshly with disrespect and made to complete pointless tasks such as braking stones. "Agricultural labourers arrive at starvation point rather than apply for poor relief, knowing that if they do so they will be dragged into the union workhouse." The Times 1843. The depression in agriculture made the times even more unbearable for the farmers. In 1830s there was a poor harvest which was part of the agricultural depression. There was a fall for the demand of agricultural produce which caused a decrease in price. At this time there was an agricultural revolution in England, which did not arrive in Wales. The Welsh farmers who could not communicate with the English because of the language difference were too poor to afford the machinery and methods of farming. ...read more.

A: "No, I do not think they are" This source gives the impression that the Welsh are fussing over nothing, and that they have the same conditions as the English. But the poverty of the Welsh was not taken into account. Bullin has given the image that nothing was wrong because of his bias so this source is not reliable. The Commission of enquiry found that, "The chief grounds of complaint were the mismanagement of funds, the frequency and the amount of tolls and in some cases the conduct of the toll collectors." D. Egan also says, "The report also criticised the ignorance of the Welsh language." The commission made "Firm recommendations for reforming the turnpike trusts including the introduction of equal tolls and the setting up of Road Boards to take control of the roads." These recommendations became law in August 1844. Through this essay I have concluded that there are a number of factors that caused the farmers to riot. These included poverty, agricultural depression, the farmers' relationship with the land owners and the tollgates. No one would listen to the farmers' pleas so they were forced to take the law into their own hands. The riots stopped after the Commission when the farmers could voice their opinions. This proves that the "Rebeccaites" were justified in their actions and that the Rebecca Riots were a justifiable expression of rural discontent. James Middleton 11SW 1 ...read more.