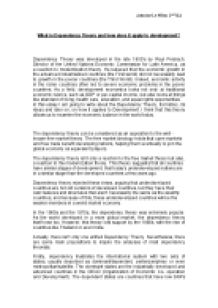 What is Dependency Theory and how does it apply to development?

ï»¿Antoine Le Mézo 2nd SIA What is Dependency Theory and how does it apply to development? Dependency Theory was developed in the late 1950’s by Raul Prebisch, Director of the United Nations Economic Commission for Latin America, as a reaction to modernization theory. He believed that the economic growth in the advanced industrialized countries (the First world) did not necessarily lead to growth in the poorer countries (the Third World). Indeed, economic activity in the richer countries often led to severe economic problems in the poorer countries. As a field, development economics looks not only at traditional economic rubrics, such as GDP or per-capital income, but also looks at things like standard of living, health care, education, and equal rights opportunities. In this essay I am going to write about the Dependency Theory, its history, its ideas and later on, on how it applies to Development. I think that this theory allows us to examine the economic balance in the world today. The dependency theory can be considered as an opposition to the well - known free market theory. The free market ideology holds that open markets and free trade benefit developing nations, helping them eventually to join the global economy as equivalent players. The dependency theory isn’t only a reaction to the free market theory but also, a reaction to the modernization theory. ...read more.

Therefore, poor countries would never be earning enough money from their exports to pay their imports. For this reason, supporters of the Dependency Theory have been trying to work out a way to prevent the poor countries to buy from the rich ones. The only solution was to produce the manufactured products on their own soil. This was known as import substitution programs. These poor countries would still be able to sell their primary products out on the world market, but on the other hand, they would not spend their money on manufactured goods coming from rich countries. A lot of countries, for example, in Latin America tried to manufacture goods on their own soil. Nevertheless, this was a very hard program to adopt. Different issues made this policy so difficult to follow. The first reason would be the fact that the internal markets of the undeveloped countries were too small to support the economies of scale used by the developed countries like USA and to keep the prices low. Another issue would be that, poor countries didn?t have the full control of their primary products. For example, the prices of cereals are decided in London and New York?s Stock Exchange. So, the poor countries produced their primary resources (for example cereals) but they couldn?t control them completely. ...read more.

3. Dependency theory suggests an alternative use of internal resources in order to prevent malnutrition instead of following the policies imposed by the rich countries. For example, poor states in Latin America have high rates of malnutrition even though they produce great amounts of cereals to export. Many dependency theorists would argue on the fact that domestic population should consume these agricultural goods in order to reduce the rates of malnutrition. In conclusion, I think that the Dependency Theory is one of the most interesting economic theory in the post-war era. It allows us to analyze the causes of undevelopment in the poor countries but also to understand the economic balance in the world market today and the links between the LEDC’s (Less Economically Developed Countries) and the MEDC’s (More Economically Developed Countries) today. Even if this theory isn’t as popular today as it was a few years ago, it is still today an interesting way to understand the inter connections between the poor and the rich countries because the world is becoming more and more a global market with the development of multinational corporations. Sources: © “Dependency Theory” Wikipedia.© 7 September 2012 < http://en.wikipedia.org/wiki/Dependency_theory > “What is Dependency Theory?” Wisegeek < http://www.wisegeek.com/what-is-dependency-theory.htm > © “Dependency Theory” (Power point) © <https://docs.google.com/viewer?a=v&q=cache:fTdwEM_6Kq0J:zimmer.csufresno.edu/~sasanf/101Documents/DependencyTheory.ppt+dependency+theory&hl=fr&gl=fr&pid=bl&srcid=ADGEEShaVF3UuID9iT3xaCfG7a1s0J0IfdrB4MlXiQ3DTe8sIObu76UrNnvH6B0EN5Wo3Rppjd_OEVAbz2OuIhZQSvnhfBQtw0Al8eTnvzkW_whR6pctBSSxNBJg-EfKzrn8Dl9Wb9G&sig=AHIEtbRFuHPsen9aeYNywORHDexG8UQf4g> “Dependency Theory” (Power point) <https://docs.google.com/viewer?a=v&q=cache:TJWc4_4I-0QJ:salises.mona.uwi.edu/sa64a/Presentation6_SA64A.ppt+dependency+thoer&hl=fr&gl=fr&pid=bl&srcid=ADGEESg5bineMakBLQDttLSoKMg6_7Dy2qvqW12DOTG-k5Bz-WG8IOEv4TjAvDrAqdGEWiFoFU8hPSMDFQ0RLnk-UWac6Y6p5FHVNdJ12Oa2nXqyoTKkz2hzoPULCbjPAGNDRzfMy7hB&sig=AHIEtbQLbaeiUjnbgrdBGGshZtRI2n1czg> © by : Vincent Ferraro, “ Dependency Theory : an introduction” Mtholyoke2008 <https://www.mtholyoke.edu/acad/intrel/depend.htm> ...read more.