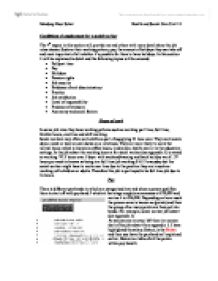 Conditions of employment for a social worker

Conditions of employment for a social worker The 4th aspect in this section will provide me and others with more detail about the job roles chosen. Such as their working pattern, pay, the amount of holidays they can take off and most important of all whether it's possible for them to have holidays. In this section it will be explained in detail and the following topics will be covered: * Full/part time * Pay * Holidays * Pension rights * Job security * Evidence of anti-discriminatory * Practice * Job satisfaction * Level of responsibility * Presence of stressors * Autonomy and social factors Hours of work In some job roles they have working patterns such as working part time, full time, flexible hours, overtime and shift working. Social workers may often work shifts as part of supplying 24 hour care. They work seven days a week or have on call duties on a rota basis. They are more likely to work the normal hours which is known as office hours, in day care, health care or in the education settings. In the job advert the working hours a for social worker (see appendix 1) is stated as working '37.5 hours over 5 days with weekend/evening and bank holiday work'. 37 hours per week is known as being in a full time job working 9 till 5 everyday but the social worker might have to work over time due to the position they are in such as working with children or adults. Therefore this job is portrayed to be full time job due to its hours. Pay There is different pay bands in which are categorised into and when a person qualifies them to start off with pay band 5 which at that stage roughly commences at �20,000 and carries it to �26,000. ...read more.

The person is entitled to as much money as he/she likes into their personal pension. For every pound they put into the pension the government tops up their pension it with the tax paid by other people. Each year that person is able to obtain tax relief on your pension contributions up to 100%. Company pensions are fixed by the employers for their employees. Their employer will make contributions on their behalf but it requires them to pay regular payments from their salary. This also offers a death benefit for your partner if you pass away before them. The person's employer also provides them with a pension early before the retirement due to ill health. If the person decides to leave their employer they unlikely to be able to contribute payments to the pension scheme. When the social worker retires at a certain age he/she receives a pension scheme that will pay them a regular income for life. As mentioned above about National Insurance Contributors, the amount of money they will receive depends on that and how much they paid towards it. They can also be entitled to a state pension however it depends on the individual's circumstances. Company pensions vary from company to company. With a company pension they there are two types of then and these are: 'final salary scheme' or 'money purchase scheme'. In the social workers case he/she will fall into the 'final salary scheme' due to they are paid with a salary. The final salary scheme depends on the amount that they receive and how many years they have been present in the scheme. ...read more.

The results of high responsibility will lead to the social worker not liking their job. Presence of stressors At some stage in the social worker's life of being a social worker may get stressful at times and they won't find the job very job satisfying. This can de-motivate them as they would be responsible for the low level of job satisfaction. Social workers job role is dealing with other people's problems and overcoming them which is very stressful in my opinion and they might feel as though they can't handle such problems and stress. Personal characteristics of workers Everyone's characteristics are different which has an effect on the satisfaction of the social worker in their job role. Some social workers will enjoy doing the same tasks over and over again meaning they are comfortable doing such tasks like this where as on the other hand there are social worker who hate or despise the fact there carrying out monotonous tasks. Autonomy A person has autonomy when they are in control of their own situation such as a social worker might not feel happy about the something which they'll report to their manager the problems that rouse at work. In the workforce however autonomy isn't very high as they have to work with experts to make sophisticated decision about clients about the actions that need to be taken. Social workers don't make decisions about clients alone there often a second party involved to do this. When there is a smaller amount of autonomy involved it's when another person is on duty therefore they don't have to do as much work. ?? ?? ?? ?? Mandeep Kaur Sohal Health and Social Care Unit 11 ...read more.

This essay is a little confusing in places. It stated that it aimed to describe a job role but actually contains more details about pay and conditions.

It could be enhanced by looking more at what the job involves and discussing that in greater detail. The writer could enhance the work by adding more relevant examples that put the job into context.