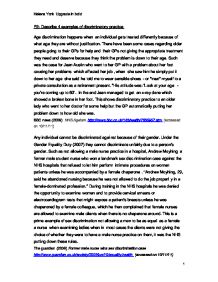 P2- Describe 4 examples of discriminatory practice Age discrimination happens when an individual gets treated differently because of what age they are without justification. There have been some cases regarding older people going to their GPs for help and their GPs not giving the appropriate treatment they need and deserve because they think the problem is down to their age. Such was the case for Jean Austin who went to her GP with a problem about her foot causing her problems which affected her job , when she saw him he simply put it down to her age she said he told me to wear sensible shoes - or "treat" myself to a private consultation as a retirement present. "His attitude was: 'Look at your age - you're coming up to 60'. In the end Jean managed to get an x-ray done which showed a broken bone in her foot. This shows discriminatory practice to an older lady who went to her doctor for some help but the GP automatically putting her problem down to how old she was. BBC news (2009) NHS Ageism. http://news.bbc.co.uk/1/hi/health/7850907.stm (accessed on 10/11/11) Any individual cannot be discriminated against because of their gender. Under the Gender Equality Duty (2007) they cannot discriminate unfairly due to a person's gender. Such as not allowing a male nurse practice in a hospital, Andrew Moyhing a former male student nurse who won a landmark sex discrimination case against the NHS hospitals that refused to let him perform intimate procedures on women patients unless he was accompanied by a female chaperone. "Andrew Moyhing, 29, said he abandoned nursing because he was not allowed to do the job properly in a female-dominated profession." During training in the NHS hospitals he was denied the opportunity to examine women and to provide cervical smears or electrocardiogram tests that might expose a patient's breasts unless he was chaperoned by a female colleague, which he then complained that female nurses are allowed to examine male clients when there is no chaperone around. ...read more.

would also have a choice of a male or female carer as its against their religion letting a male see them naked unless their married so they'd be given the choice. Also the choice of food they as they eat halal meat this would mean the care home would need to order the food to the clients specific food choice M2) choose a national initiative and assess how it influences anti-discriminatory practice The Human Rights Act applies to everyone within the country as it makes sure everyone is treated the same but it could be in different ways. This act allows students to have freedom of thought and religion. People are allowed to have and voice their own opinions but they have to take into consideration not everyone believes the same and they may disagree with their opinion. It helps people to become their own individual and to express themselves in a healthy way. This act also allows everyone to have the right to further and higher education within their own county. An example of this would be is a Hindu child wants to wear a head dress and still go to the same school as everyone else; she is able to come and learn in the school even though she wears a head-dress because the Human Rights Act 1998 allows everyone to have freedom of thought and religion. This act promotes good practice and influences how staff come together and work to meet the standard of this legislation to ensure every individual is treated with respect and equal among others. When staffs are meeting this act they would be ensuring that no one would become discriminated against because of their race, gender or religion which would make a happier society if everyone was treated was the same as everyone else. Active promotion of equality and individual rights in health and social care setting is the principles of the care value base, putting the patient/service user at the heart of service provision, e.g. ...read more.

As if an individual has a problem being treated by a member of staff for varied reasons such as being male the staff would need to ensure that the problem was overcome quickly and smoothly to try and not upset the client . An example of this is a certain religion may not allow females to be treated by a male doctor/nurse this would need to be respected and put right by getting a female doctor/nurse into treat the individual to respect their needs. You would use the person centred approach here as you are planning the care that individual needs around making sure you take in their needs and beliefs into account. Also another barrier which could need to be overcome is the story of Dan James which i mentioned in my M3 essay in which he flew out to Switzerland in order to die as he couldn't do it after seven attempts at suicide himself. Dan James chose to fly out there as it is illegal to do it in any other country and if anyone was found to be helping him in England they could be prosecuted for killing someone . Dan was able to overcome this barrier of not being allowed to have assisted suicide in England to fly to Switzerland where the legislation on euthanasia in Switzerland permits assisted suicide. To conclude every individual has the right to personal choice even if the law sometimes does not allow this and also the right to not be discriminated against. I believe that all individuals who face challenging barriers within being unwell have the right on how they proceed in getting better or ending their life and I believe that the law should reflect this when dealing with difficult situations as i think they should be allowed to commit euthanasia in the UK if they choose to as this allows them their rights to be fulfilled otherwise they would have to travel to Switzerland to do this (Dan James and Dianne Petty). ?? ?? ?? ?? Helena York Upgrade in bold 1 ...read more.