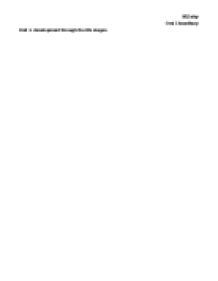 Describe physical, intellectual, emotional and social development for each of the life stages of an individual.

﻿M.Daley Omi Chowdhury Unit 4- development through the life stages ________________ P1 describe physical, intellectual, emotional and social development for each of the life stages of an individual. There are 8 different life stages of a human being, ranging from conception to the final stages of life. There are four ?well-being?s?. These are: Physical well-being, intellectual well-being, emotional well-being and social well-being. In addition to this I will also be explaining how language development takes place as a part of the intellectual well-being of each life stage. I will also include Erik Erikson's emotional development. Conception. Human life begins at conception. This happens through sexual intercourse, when millions of sperm are ejaculated into the vagina. However only one sperm can fertilise the egg. ?Only a few thousand get to where the egg (Ovum) is, which is usually at the outer end of one of the tubes. Only one of these will actually fertilize the egg. The sperm and egg fuse to form one cell, which is called a zygote. This cell will undergo incredible changes in the ensuing days, resulting in a mature baby about an estimated forty weeks later.? Physical Well-being. In order to have a baby you will need to have sexual intercourse with someone. Preferably with someone that you have a sexual relationship with and have mutual feeling for each other. If an unexpected pregnancy has occurred, during the first few weeks the mother will not feel any 'inner' physical effect in the womb. It is extremely common for the women to not know she is pregnant (if it was an unexpected pregnancy). This is due to the fact that in the first few weeks of pregnancy, you cant actually feel anything Intellectual Well-being. ...read more.

Mistrust Being able to trust and having a sense of security Not able to trust those around him/her Autonamy Vs. Shame Pride and confidence in self especially when encouraged Doubt their ability if discouraged may feel that they are not good enough Social well-being Infants usually recognise people by their smell, touch and faces. When they don't recognise someone they either get scared or shy. As they get older they would try to play with their siblings or family members although they do not know what they?re doing. When they get a little older they can play without having their parent or guardian around them for up to several hours. As Infants start to grow older they develop routines, meet people as well as playing with other children their age Childhood (4-9 years) At this life stage children continue to grow all rounds, physically, intellectually, emotionally and socially. For example, children's communication skills develop further and their emotions become a lot more complex. Language development This was developed by Naom Chomsky and Steven Pinker. They believed that the ability to develop a signed or spoken language is genetically programmed into us. Age The development of Language Around 3 months Infants begin to make babbling noises as they learn to control the muscle that?s linked with speech Around 12 months Imitate sounds which are made by carers such as ?da-da? this then develops in to single words Around 2 years Begin to make two-word statements. For example ?da-da goed? (meaning that dad has gone). At this stage children begin to build up their vocabulary. Around 3 years Children can say basic sentences and questions such as ?I want drink? ?want it? Around 4 years At 4 years, children begin to use clear sentences which can be understood by strangers. ...read more.

They find new types of relationships such as room-mates or a long-term relationship and they start to relate to their parents as equals instead of inferior when it comes to their opinions. Even starting work involves working relationships which are formal relationships. Later adulthood (65+ years) This is the stage that starts with pension; an adult eases away from responsibilities as their children may be married and busy with their own family and life. Physical well-being There are many obvious physical changes in a person at the stage of later adulthood, some of these may include: People usually become shorter as their posture becomes less upright and their spine begins to curve. Their skin wrinkles and the skin loses its elasticity, hair thins and becomes grey, bones become brittle, body organs are less efficient, eyesight gets worse and hearing gets worse. Intellectual well-being People tend to forget more quickly especially when under pressure also their reaction times become slower for example driving a car, their reactions will be a lot slower compared to a young adult. However, due to their experiences they are more likely to make a better decision compared to anyone else. Emotional well-being People may be upset and lonely as they may be living alone as their children have moved out and have married or are busy with work and their own family, so they may not have company. Another factor can be that their partner has passed away so they are completely alone at home. Social well-being People might feel isolated and not needed as they will have a lot more spare time in their hands due to retirement, some people enjoy the extra time by pursuing their hobbies and interests while others miss their work-mates and socialising with friends. However, as a grandparent they might enjoy the company of their grandchildren without taking responsibility for them. ...read more.