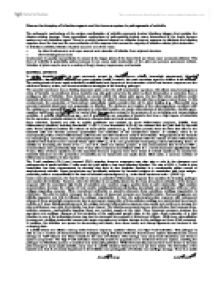 Discuss the interplay of infectious agents and the immune system in pathogenesis of arthritis.

Discuss the interplay of infectious agents and the immune system in pathogenesis of arthritis. The pathogenic mechanisms of the various manifestation of arthritis commonly involve infectious triggers that mediate the disease-causing damage. These generalised mechanisms of pathogenicity include many interactions of the host's immune system and any infectious agent. There is a subtle balance between an effective immune response to eliminate the infecting organism from the host and the over-activation of this response that causes the majority of infection-related joint destruction. In infectious arthritis, infection of joints occurs in one of two ways: * by direct involvement, as in open wounds and extension of infection from adjacent structure * the haematogenous route Involvement is usually monoarticular in nature & the larger joints of the lower limb are those more commonly affected. This form of arthritis is potentially serious because it can cause rapid destruction of the joint and produce permanent defects. Infection of joints may be due to a variety of fungi, viruses, treponemes, and bacteria. BACTERIAL ARTHRITIS In adults, bacterial arthritis is most commonly caused by Staphylococcus aureus, haemolytic streptococci, Neisseria gonorrhoeae, Haemophilus influenza and gram-negative bacilli, however, the main causative agent in children is H. influenza. The pathogenesis of acute septic arthritis is multifactorial and depends on the interaction of the host immune response and the adherence factors, toxins, and immunoavoidance strategies of the invading pathogen. The synovial membrane has no limiting basement plate under the well-vascularized synovium; this allows easy hematogenous entry of bacteria. As mentioned above, bacteria may also gain entry into the joint by direct introduction or extension from a contiguous site of infection. Once bacteria are seeded within the closed joint space, the low fluid shear conditions enable bacterial adherence and infection. Colonization may also be aided in cases where the joint has undergone recent injury. In this environment, the production of host-derived extracellular matrix proteins that aid in joint healing (e.g., fibronectin) ...read more.

Studies have shown that T cell recognition of multiple different peptides occurs much more frequently than previously assumed and that sequence similarity is not a prerequisite for such cross-recognition. Several regulatory mechanisms normally prevent cross-reactive T cells from causing injury. First, both the microbial peptide and the self-peptide must be processed and presented by antigen presenting cells. Also, the self-antigen must be present at high enough concentrations and the T cells at high enough numbers. Third, the T cells must receive the appropriate co-stimulatory signals from antigen presenting cells to produce the proinflammatory cytokines required for tissue damage rather than protective cytokines. Fourth, the T cells must be capable of migrating to the tissue where the cross-reactive self-antigen is expressed and must escape immunoregulation. Finally, some degree of autoreactivity seems to be necessary for the survival of naive T cells and possibly also for memory T cells. The idea that cross-reactivity between one particular microbial peptide and one particular self-peptide is indicative of pathogenicity is thus probably too simple. Nevertheless, molecular mimicry remains one attractive hypothesis for the pathogenesis of autoimmune disease. For example, microbial peptides might help to maintain the pool of memory T cells specific for an autoantigen. Furthermore, persistent or recurrent infections could bring the number of autoreactive T cells over a critical threshold, thereby supporting the development of autoimmune disease. Mononuclear cells or T cell clones derived from the synovial fluid of patients with Lyme arthritis produce a Th1 cytokine pattern. B. burgdorferi can induce Th1 phenotype development in naive Th cells and early data seemed to indicate an association of Th1 responses with susceptibility to arthritis in murine models. More recently, however, it has become clear that there is no clear correlation between Th1 or Th2 responses and susceptibility to Lyme arthritis in murine models of the disease. In addition, cytokines such as IL-1�, IL-6, IL-10, IL-11, or IL-12 that are produced by cells of the innate immune system have been implicated in the regulation of arthritis severity in patients or animal models. ...read more.

Furthermore to the previous suggestion of Type 2 collagen as an autoantigen - it's also postulated that glycoprotein-39 make have a role as it has been shown that it binds to DR4 peptides allowing the possibility of targeting by T-cell regulated immune reaction. Initially CD4+ cells dominate in the affected joints, but following the expression of ICAM-1 they are soon joined by other inflammatory cells, namely CD4 and T cells. The cytokines released by these inflammatory cells, especially IL-15, result in chronic immunological injury. In addition to this, CD4+ cells also activate B cells resulting in antibody production, including rheumatoid factor (an autoantibody to the Fc portion of autologous IgG). The IgM antibodies seem to predominate, and once in the circulation self-associate (RA-IgG) to form immune complexes which is a possible mechanistic explanation for the extra-articular manifestations of RA. However, one must note that there are a significant proportion of RA patients who are seronegative for rheumatoid factor & it is also present in the population without disease. The destructive-proliferative synovitis is mediated mainly by cytokines, TNF, IL-1, IL-6, IL-15, interferon and growth factors (as well as proteases & elastases). The upregulation on synoviocytes of VCAM-1 facilitates the accumulation of white blood cells in the inflamed synovium. Furthermore, the VCAM-1 expressing synoviocytes adhere to the cartilage matrix that promotes the destruction of the articular surface by the synoviocytes. In conclusion, it is clear to see that there is much interplay between the immune system & infectious agents in the pathogenicity of arthritis. It is clear that there is a balance that needs to be achieved by the immune system in dealing with infectious agents - and it seems that subtle imbalances can lead to the most heinous of diseases. Although there is still much for the scientific community to learn about the mechanistic pathology involved, our current knowledge is allowing relatively effective treatment of different manifestations of arthritis and offering a continually improving prognosis for sufferers. Downing College Jubin Joseph ...read more.