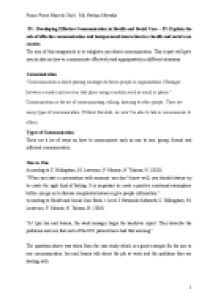 Explain the role of effective communication and interpersonal interaction in a health and social care context.

﻿Prince Pierre Marcelo Unit 1 Ms. Neelam Mavadia P1: Developing Effective Communication in Health and Social Care ? P1: Explain the role of effective communication and interpersonal interaction in a health and social care context. The aim of this assignment is to enlighten you about communication. This report will give you an idea on how to communicate effectively and appropriately in different situations. Communication ?Communication is about passing messages between people or organisations. Messages between a sender and receiver take place using a medium such as email or phone.? Communication is the act of communicating, talking, listening to other people. There are many types of communication. Without this skill, we won?t be able to talk or communicate to others. Types of Communication There are a lot of ways on how to communicate such as one to one, group, formal and informal communication. One-to-One According to C. Billingham, M. Lawrence, P. Moonie, N. Talman, H. (2010) ?When you start a conversation with someone you don?t know well, you should always try to create the right kind of feeling. It is important to create a positive emotional atmosphere before you go on to discuss complicated issues or give people information.? According to Health and Social Care Book 1 Level 3 Nationals Aldworth, C. Billingham, M. Lawrence, P. Moonie, N. Talman, H. ...read more.

As the other staff came to the ICU office, the conversation turns to work-related matters which is a formal communication because this is a professional matter and they may be talking to someone higher than them for example, their manager. Informal Communication Informal Communication is used when talking to someone you know such as family and friends. Language is more loosen up than the formal communication. Example: ?Chloe arrives a few minutes early for the shift so that she can have a chat with Janet, a colleague and friend, before the shift begins. They chat about the holiday that they are planning to that in Jamaica this summer.? - This quotation from the case study is an example of an informal communication. This is because their conversation is between friends and not a work related matter. Another example of informal communication is the following: ?Hey, what?s up?? ?Hey man, what are you up to?? These two sentences show how loose the language is. These are commonly used by friends who know each other for a long time. Interpersonal Interaction Interpersonal interaction comprehends all types of contact between people and not just talking. The interaction between individuals may involve gestures, sounds, drawings, and touch. Non-verbal Non-verbal interaction is a process of communication where people sends and receives information without talking. For example: ?Emma is asked to observe Chloe and the ICU doctor doing this so that she will be able to help in future? - in this situation, Emma is asked to observe Chloe on what she is doing. ...read more.

- In this situation, accent used to show the variation in listening Reflecting back To be able to reflect back effectively, the listener should be able to listen and analyse what the speaker is talking about. By reflecting back, you are demonstrating that you fully understand what your client have said and repeating what they told you and giving appropriate feedback to effectively reflect back. Language Language is used to create effective communication. Without this, we will struggle to communicate verbally. In some countries, there are some words that might mean something different from another country. For example: In Britain, when we say NHS this means National Health Service. But in the United States, NHS means National Historic Site. - This shows how one word can be different from one country to another. This means that we cannot just assume that an individual knew what we are talking about. Conclusion I would say that communication is imperative, to understand everyone around you. It would be difficult to a person who works in a health or care environment if your communication skills are poor. This is why people who work in health and social care settings study on how to communicate in different ways to communicate effectively. Reference Chandler, D. & Munday, R., A Dictionary of Media and Communication in Economics & Business, 2011. Oxford University Press 2011., Hine, R,Martin, E., 2008, A Dictionary of Biology., Clays Ltd, St. Ives plc., Great Britain http://www.englishforums.com/English/ListeningProblemsAccentSound-Variation/pnqjd/post.htm http://en.wikipedia.org/wiki/Language https://www.google.co.uk/#hl=en&gs_nf=1&pq=variations%20on%20communication&cp=11&gs_id=3j&xhr=t&q=what+is+culture&pf=p&sclient=psy-ab&oq=what+is+cul&aq=0&aqi=g4&aql=&gs_l=&pbx=1&bav=on.2,or.r_gc.r_pw.r_qf.,cf.osb&fp=33c54117c0a1d19a&biw=1344&bih=740 http://www.livestrong.com/article/150573-what-is-verbal-communication/ http://answers.yahoo.com/question/index?qid=20090920031846AAPakSR http://www.bbc.co.uk/schools/gcsebitesize/business/people/communicationrev1.shtml http://www.oxfordreference.com/views/ENTRY.html?entry=t326.e1150&srn=1&ssid=939978907#FIRSTHIT http://www.oxfordreference.com/views/ENTRY.html entry=t326.e1915&srn=1&ssid=1254344249#FIRSTHIT ...read more.

This essay has some good starting points but it would benefit from better explanations. In some cases the work is adequate but not fully covered. There is not a wide enough variety of references to health and care settings.

The writer needs to extend the examples given and could discuss the communication cycle to enhance their work.