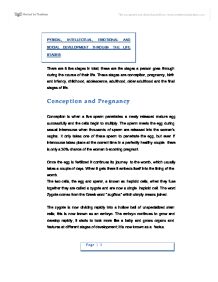 PYSICAL, INTELLECTUAL, EMOTIONAL AND SOCIAL DEVELOPMENT THROUGH THE LIFE STAGES

PYSICAL, INTELLECTUAL, EMOTIONAL AND SOCIAL DEVELOPMENT THROUGH THE LIFE STAGES There are 8 live stages in total; these are the stages a person goes through during the course of their life. These stages are conception, pregnancy, birth and infancy, childhood, adolescence, adulthood, older adulthood and the final stages of life. Conception and Pregnancy Conception is when a live sperm penetrates a newly released mature egg successfully and the cells begin to multiply. The sperm meets the egg during sexual intercourse when thousands of sperm are released into the woman's vagina. It only takes one of these sperm to penetrate the egg, but even if intercourse takes place at the correct time in a perfectly healthy couple there is only a 30% chance of the woman becoming pregnant. Once the egg is fertilized it continues its journey to the womb, which usually takes a couple of days. When it gets there it embeds itself into the lining of the womb. The two cells, the egg and sperm, a known as haploid cells, when they fuse together they are called a zygote and are now a single haploid cell. The word Zygote comes from the Greek word "zugotos" which simply means joined. The zygote is now dividing rapidly into a hollow ball of unspecialized stem cells; this is now known as an embryo. The embryo continues to grow and develop rapidly, it starts to look more like a baby and grows organs and features at different stages of development; it is now known as a feotus. ...read more.

Also children now like taking things apart, such as toys, this is why some toys come with warning on them that they are not to be given to children under the age of 3 years, as small bits can be taken off them and put into their mouths and therefore can be swallowed. Children also learn to follow simple on step instructions and begin to understand the meaning of the word no. Children now also begin to be able to point out objects in books, this is why it's important to introduce children to books at such young ages, as the earlier the learn to recognise objects the earlier they begin to recognise words by matching them with the pictures. This is the beginning of the learning to read process. Emotional Development Emotional development up to the age of 18 months is basically just the attachment of relationships and bonding between child and carer. Between the ages of 2 and 3 months a child learns to understand the word "I" and recognises that you exist and are separate from others. Between the ages of 9 and 12 months a child begins to learn to recognise themselves in a mirror or photo, this is developing self awareness and this lead to self concept. Self concept is made up of two things which together give us the way we think of ourselves, these two things are, self-esteem; how we value ourselves, and self-image; people's reactions to us. ...read more.

the child's milk teeth fall out, the age at which this starts depends on the child and how well the look after their milk teeth. A child's face also gets thinner as the child grows; this is because the "puppy fat" around the cheeks begins to disappear. Sometimes the babies face shape doesn't actually change but just comes more into proportion with the rest of the child. Also hair colours tends to get darker, a child who is born with blonde hair tends to have darker hair when they grow older, hair can also go from curly to straight or straight to curly. Up until about the age of 7 girls and boys both grow at similar rates, although this rate varies from person to person, however when a child reaches the age of about 7 the rate at which they grow varies depending on whether they are male or female, Females tend to grow at a quicker rate than boys at primary school age, and although most males end up being taller than females, females have their growth spurts early. By the age of nine children continue to grow in size, strength and co-ordination, with all their gross and fine motor skills becoming stronger. Handwriting becomes a lot neater as they get older as they have more control over their hands, also this sense of co-ordination helps them to play sports such as swimming, tennis and football, and also helps them in activities such as painting, model making and playing musical instruments. ?? ?? ?? ?? Page | 1 ...read more.

A fairly good essay that discusses developments in infancy and some in childhood only. It would appear unfinished in relation to the title.

The writer has included some of the relevant milestones but focuses on physical to a far greater extent. This is quite common in this form of essay and it could be enhanced by discussing the other PIES in the same detail.