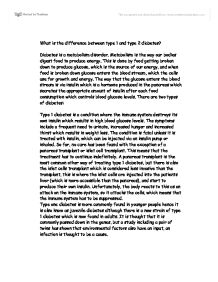 What is the difference between type 1 and type 2 diabetes?

What is the difference between type 1 and type 2 diabetes? Diabetes is a metabolism disorder. Metabolism is the way our bodies digest food to produce energy. This is done by food getting broken down to produce glucose, which is the source of our energy, and when food is broken down glucose enters the blood stream, which the cells use for growth and energy. The way that the glucose enters the blood stream is via insulin which is a hormone produced in the pancreas which secretes the appropriate amount of insulin after each food consumption which controls blood glucose levels. There are two types of diabetes: Type 1 diabetes is a condition where the immune system destroys its own insulin which results in high blood glucose levels. ...read more.

considered less invasive than the transplant, this is where the islet cells are injected into the patients liver (which is more accessible than the pancreas), and start to produce their own insulin. Unfortunately, the body reacts to this as an attack on the immune system, so it attacks the cells, which means that the immune system has to be suppressed. Type one diabetes is more commonly found in younger people hence it is also know as juvenile diabetes although there is a new strain of type 1 diabetes which is now found in adults. It is thought that it is commonly passed down in the genes, but a study including a pair of twins has shown that environmental factors also have an input, an infection is thought to be a cause. ...read more.

The standard symptoms include a frequent need to urinate, increased hunger and increased thirst and fatigue which results in weight loss. The body builds its own resistance to insulin anyway but when a person is unhealthy and eats too much, more insulin is produced which means that the body builds up a resistance faster, which tends to make the patient even more overweight. Too much insulin is also toxic for the cells and can damage them, so the cells react and down-regulate their receptor capacity. This kind of diabetes can often lead to heart or cardiovascular diseases. The effects can be delayed by proper nutrition and exercise, but it is a progressive chronic disease. Both types of diabetes can be detected via a glucose tolerance test. ...read more.