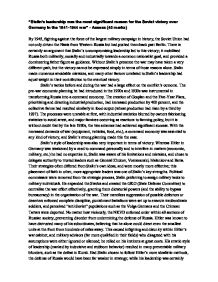 "Stalin's leadership was the most significant reason for the Soviet victory over Germany in the 1941-1944 war" - Assess (45 marks) By 1945, fighting against the force of the largest military campaign in history, the Soviet Union had not only driven the Nazis from Western Russia but had pushed them back past Berlin. There is certainly an argument that Stalin's uncompromising leadership led to this victory; it mobilized Russia both militarily, socially and industrially towards a common nationalist goal, and provided a domineering father figure as guidance. Without Stalin's presence the war may have taken a very different path, but the victory cannot be expressed simply in terms of those reasons alone. Stalin made numerous avoidable mistakes, and many other factors unrelated to Stalin's leadership had equal weight in their contribution to the eventual victory. Stalin's tactics before and during the war had a large effect on the conflict's outcome. The pre-war economic planning he had introduced in the 1920s and 1930s was instrumental in transforming Russia into a command economy. The creation of Gosplan and the Five-Year Plans, prioritizing and directing industrial production, had increased production by 400 percent, and the collective farms had resulted similarly in food output (wheat production had risen by a third by 1937). ...read more.

Again, while this move may now seem opposed to Communist policy, it was very effective during wartime, attracting a largely religious population to the war effort. While these policies were certainly responsible in part for the victory, we cannot ignore the role of other factors, and also Stalin's shortcomings. Firstly, Stalin made a series of significant mistakes which must be counted against his role in the 1945 triumph. While his general attitude to policy had definitely helped the USSR, many other strategic decisions had undesirable effects. The Nazi-Soviet Pact (signed out of an anxiety that Germany would invade the USSR) and the resulting trade pact of 1940 had equipped the Germans with the food, resources and materiel necessary to invade Russia in the first place. Pre-war purges of the Red Army, which executed 22,000 officers, accounted for initial troop shortages in 1941, and led to a series of crippling defeats. Similarly, in his policies of savage human repression, Stalin had alienated key sections of Russia (such as the annexed Baltic states and the Ukraine), leading one million Soviet soldiers to choose to fight on the German side. Stalin had failed to respond to the overwhelming evidence that a German invasion was imminent by 1941, believing that Hitler would not attack until he had conquered Britain. ...read more.

The Soviet people - fueled by propaganda, government suppression and German brutality - were more attuned to unimaginable hardship, and the cities continued to be defended at the cost of millions of lives. By 1944 it was simply impossible for the Germans to continue in this manner, having nearly depleted their human resources. This is one of the most unavoidable reasons for their defeat. The role of the Allies also complemented this; the relentless bombing of German cities and industrial centres had a very powerful impact on Germany's civilian population and industrial power. The engagement of German forces in additional fronts (North Africa, Italy, France) stretched German resources and forced Hitler to divert troops and vehicles from Stalingrad and Kursk, weakening the already flagging invasion of Russia. The Lend-Lease Agreement between the USA and the Soviet Union supplied the Red Army with financial aid and vehicles, allowing the USSR to take advantage of German failures. These Allied efforts against Germany helped significantly towards their retreat. In conclusion, though Stalin's leadership definitely had an undeniable effect in mobilizing Russians towards the war effort, there are more persuasive factors involved: Russia's human, military and economic resources, German mistakes, and the contribution of the Russian people to the war effort (spurred on partially by German policy). When considering these factors, and mistakes he made at the beginning of the war Stalin's leadership cannot be called the main reason for the Soviet victory. ...read more.