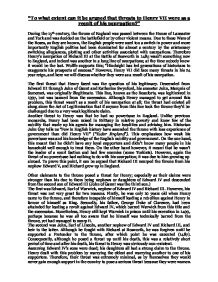 To what extent can it be argued that threats to Henry VII were as a result of his usurpation?

"To what extent can it be argued that threats to Henry VII were as a result of his usurpation?" During the 15th century, the throne of England was passed between the House of Lancaster and York and was decided on the battlefield or by other violent means. Due to these Wars of the Roses, as they are known, the English people were used too a switch in power and more importantly English politics had been dominated for almost a century by the aristocracy switching allegiances, plotting and other activities associated with usurpations. Therefore Henry's usurpation of Richard III at the Battle of Bosworth in 1485 wasn't something new to England, and indeed was another in a long line of usurpations; at the time nobody knew it would be the last. Wolffe supports this; "Hindsight has led generations of historians to exaggerate his prospects of success." However, Henry VII did face many threats in his 24 year reign, and here we will discuss whether they were as a result of his usurpation. The first threat that Henry faced was the question of his legitimacy. Descended from Edward III through John of Gaunt and Katherine Swynford, his ancestor John, Marquis of Somerset, was originally illegitimate. This line, known as the Beauforts, was legitimized in 1397, but was banned from the succession. ...read more.

Simnel was a large threat to Henry, especially as this uprising began in 1486, less than a year after Henry took the throne. Simnel claimed to be the Earl of Warwick, and gained the support of the Earl of Lincoln. His main support was in Ireland, where there were strong Yorkist sympathies and the Lords supported him mainly as a show of independence from England. After Henry produced the real Warwick to prove Simnel was a fake, Lincoln and Simnel fled to Burgundy, where Duchess Margaret (Richard III's sister) protected them and organised an army of 2000 German mercenaries. This army landed in England along with an Irish one in June 1487 in a bid to take over the throne. Although Henry defeated them at the Battle of Stoke, the nobles hadn't stopped the army, showing their indifference towards Henry. This was a threat to Henry because it showed up the hostility of two of England's neighbours (Ireland and Burgundy) and the indifference of his own nobles towards Henry. However, it must also be remembered that the uprising gained almost no support on mainland England. The other Pretender was Perkin Warbeck, who claimed to be Prince Richard, younger son of Edward IV (it is accepted that he was really murdered in the Tower with his brother Edward V). ...read more.

With the exception of the Yorkshire rebellion, the rebellions that Henry faced, including those of the two Pretenders, were all directly or indirectly caused by his usurpation, as they all wanted him off the throne. All except the Cornish rebellion were doing this in support of the Yorkist claim, which wouldn't have occurred if he, a Lancastrian hadn't usurped the throne. Henry, however, handled all of these threats well and flexibly; he was ruthless and showed mercy depending on the situation. In conclusion, ignoring that all the threats were down to the usurpation because if he hadn't taken the throne, he wouldn't have the threats in the first place, it is possible to argue that to a partial extent the threats Henry VII faced were due to his usurpation. Some of the threats he faced had nothing to do with his usurpation e.g. his weak legitimate claim, and others can be linked to his usurpation, but would either always have been a threat to whoever the monarch ascended the throne was e.g. other claimants to the throne or weren't completely linked to the usurpation. Other threats can de directly (or indirectly) linked to his usurpation e.g. the rise of Pretenders and the Stafford/Lovell uprising and the Cornish rebellion. Although the many threats proved how fragile his position really was, Henry managed to keep his throne and achieve his greatest aim; securing the Tudor dynasty. ...read more.