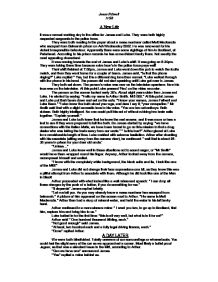 A New Life It was a normal working day in the office for James and Luke. They were both highly respected sergeants in the police force. They were both reading in the paper about a mass murderer called Matt Mackenzie who escaped from Belmarsh prison on Ash Wednesday 2002. He was renowned for his violent irresponsible behaviour. Apparently there were some sightings of him in Scotland, at Peterhead. According to his prison records he has some distant family there. Not exactly the most appealing characters! It was coming towards the end of James and Luke's shift. It was going on 6:30pm. They were taking there time because extra hour's in the police force pays well! Their shift finished at 7:00pm, James and Luke went down the pub to watch the footie match, and then they went home for a couple of beers. James said, ''is that the phone ringing?'' Luke replied '' Yes, but it is a different ring tone than normal. ''Luke walked through with the phone in his hand. The person did not start speaking until Luke got near to James. They both sat down. The person's voice was now on the television speakers. Now his face was on the television. At this point Luke pressed 'Rec' on the video recorder. ...read more.

*** The car slowly stopped. We were then un - blindfolded, and forcefully pulled out of the car. It looked like a large town centre, possibly Peterhead, as that is where Matt Mackenzie was last sighted. We passed a MacDonald's, which just reminded me that I hadn't eaten in twenty-four hours. Fortunately I spotted a mini bar in the car between where Luke and I were sitting. I went for the Tuna salad sandwich. *** I wasn't prepared for what happened in the next few seconds. We were driving along at a normal pace (seventy miles per hour on the motorway) then we sped up to one hundred and ten miles an hour and drove into a tanker on the rear end of a lorry. Just like the scene on 'The Italian Job'! It all seemed so natural to the driver in front, but to be honest I was hysterical! Luke exited the car first and closed the door with a firm slam. Then what looked like Arthur appeared from the shadows in the corner. He shook my hand, like he was pleased to see me. ''Hello James.'' I replied ''what are we doing here, where are we, and how long will we be here for?'' I was acting very hostile towards him. ...read more.

The car then stopped opposite a dilapidated pub. ''There it is'' Arthur said in a sombre mood. ''Stay outside'' I said, ''we won't be long''! Arthur smiled for the first time, but I wasn't joking. We then entered the pub and right before my very eyes was Steve Mackenzie. A mass murderer loose in the community. On the run. I whispered in Luke's ear my plan: '' we will use my tranquilliser darts on him. You will pose as a paramedic and drag him out of the pub, with my help.'' As soon as Luke could argue I did it, and got him right in the arm. He jolted and lay on the bar table, immobilised. Luke came rushing over saying in a loud but calm voice: ''don't worry i am a paramedic, out of my way.'' I smiled and helped Luke drag him out. The Jaguar was still there and Arthur got out to help us. The Asian guy (who's name I never asked) gave us the cash and driving licence, and another identical Jaguar pulled along side us. ''Merry Christmas'' he said and stepped into the other Jaguar with Arthur and a paralysed Steve Mackenzie. Luke turned to me and said: ''over time in the police force will never be the same again!'' I smiled stepped into the Jaguar and found two tickets to Italy. My uncle will be happy I thought to myself. James Feltwell 11GR ...read more.