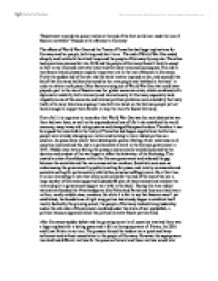 "Resentment towards the peace treaties at the end of the first world war made the rise of fascism inevitable" Discuss with reference to Germany The effects of World War One and the Treaty of Versailles had huge implications for Germany and her people, both long and short term. The end of World War One ended abruptly and took both the allied troops and the people of Germany by surprise. The allies had operations planned far into 1919 and the people of Germany found it hard to accept as their army remained relatively intact and Germany remained unoccupied. This led to two factors which played an equally important role in the rise of fascism in Germany; Firstly the sudden end of the war and the harsh treaties imposed on her, and secondly the belief that Germany had been betrayed by her own people and 'stabbed in the back' in order to obtain a soft peace. Other factors arising out of World War One that could have played a part in the rise of fascism was the global economic crisis, which combined with diplomatic instability both internally and internationally hit Germany especially hard. Arguably some of the economic and internal political problems were created by the treaty itself, with many historians arguing it was both too harsh on the German people yet not harsh enough to cripple them forever or stop the rise of a fascist Germany. ...read more.

Another huge issue was the loss of German people, either through loss of territory or colonies this amounted to approximately six and a half million subjects, of whom half were German speaking. Ironically the treaty adopted a principle of national determination for everyone except the Germans, with huge amounts of Germans now in Poland and Czechoslovakia and millions more in Austria. This simply accentuated a sense of wounded racial pride in Germany and was a huge blow to national pride. Although these factors are not the sole reason for the rise in fascist Germany it does help to explain the German attitude to the peace settlement. It can also help to explain the reluctance of Germany to comply with the treaties, with defaults on reparation payments leading to the French and Belgian occupations of the Ruhr and secret deals with the Russians in order to seek rearmment showing a growing disregard for its authority. It can also be argued that the treaty would only be in place as long as the powers could enforce it, with all three leaders Wilson, Clemanceau and Lloyd George being out of power within a few years amendments and reductions in reparations became inevitable. This weakened the treaty and fuelled the growth of German right wing policies that called for it to be scrapped and the growing popularity among German people who now saw this as a right. ...read more.

In terms of the treaty it could be argued that although the seeds of a fascist Germany had already been sown, the treaty and the superpowers involved missed a real opportunity to stop the simmer pot of extremism that would one day go on to start the second world war. The terms of the treaty provoked resentment in the German people and they very much resented the fact that the peace was a 'dikdat' and without consultation. Reparations were harsh, completely unviable and led to further friction with France as well as contributing to the domestic and economic crisis that ensued in Germany in the 1920's. Displacement of Germans outside the borders only perpetuated nationalistic feelings and right wing fascist parties had easy pickings of issues to sympathise with. However although historians were previously quick to judge the right wing and fascist parties and assume they dictated their fascist ways on the German people, most modern historians now accept that it was the economic and internal political turmoil that made the rise of fascism possible. It could also be argued based on the evidence provided, that a large majority of the problems facing Germany were in actual fact caused by the treaty itself, the unfair conditions initially imposed and the lack of enforcement leading to the eventual breakdown of the treaty and the rise of the Nazi party itself. ?? ?? ?? ?? ...read more.