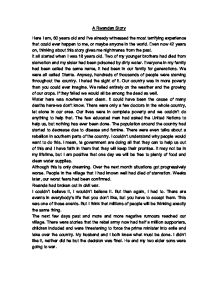 A Rwandan Story Here I am, 60 years old and I've already witnessed the most terrifying experience that could ever happen to me, or maybe anyone in the world. Even now 42 years on, thinking about this story gives me nightmares from the past. It all started when I was 18 years old. Two of my younger brothers had died from starvation and my sister had been poisoned by dirty water. Everyone in my family had been called the same name, it had been in our family for generations. We were all called Diante. Anyway, hundreds of thousands of people were starving throughout the country. I hated the sight of it. Our country was in more poverty than you could ever imagine. We relied entirely on the weather and the growing of our crops. If they failed we would all be among the dead as well. Water here was nowhere near clean. It could have been the cause of many deaths here-we don't know. There were only a few doctors in the whole country, let alone in our area. Our lives were in complete poverty and we couldn't do anything to help that. The few educated men had asked the United Nations to help us, but nothing has ever been done. ...read more.

In the months that passed, I was very lonely. The one child that I had left was only two months old so he slept for most of the day. No one in the village had heard of the soldiers or what was happening in the war. Although one day when everyone in the villages hopes had fallen to the bottom of a bottomless pit a message arrived from a white man on a horse. He dismounted and everyone gathered round him. Without been asked anything he said "I am an ambassador from the United Nations Army. Your countries government has asked American Leader George Bush for support but he has rejected. He says that your country can fight out your civil war without involving his troops. I have been to many villages such as this one and seen the hope on people's faces, only to become glum again when I tell them the news. I do not think that any of your loved ones are dead, as there has not been any fighting yet. I do not have the time to answer your questions, as I must tell lots of other villages before sunset. I wish you the best of luck to help you through this difficult time." ...read more.

We heard stories that he too had been slain by the rebel leader himself, Madi Diouf. So from then on we would hear nothing until the day that they returned. I prayed that I would see that day. Thankfully, that day did arrive. Our glum spirits were lifted by two hundred percent when we saw them, a roup of villagers that we knew walking towards us under the scorching red sun. when they were within fifty yards of where I was standing I ran towards them, crying tears of joy. Although unfortunately they were tears of sadness as well. Out of the fifty villagers that went to war, only thirty six had returned. I was one of the unlucky ones. My husband was the only person out of my family that I could see. I ran up to him and hugged him. "What Happened?" I cried. "Are neither of them coming back?" "No" he replied sadly. "They were both killed in an instant, blown apart by mines in the ground. There was nothing anyone could do about it. As soon as I saw their bodies lying hopelessly on the ground I could see that they were dead. There was nothing I could do." "So what happened?" I asked. "What was it like?" "I'd rather not talk about it today" he replied yawning. "Saying that I'd rather not talk about it ever." "I understand." I said. And I did. ...read more.