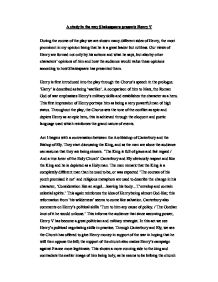 A study in the way Shakespeare presents Henry V

A study in the way Shakespeare presents Henry V During the course of the play we are shown many different sides of Henry, the most prominent in my opinion being that he is a great leader but ruthless. Our views of Henry are formed not only by his actions and what he says, but also by other characters' opinions of him and how the audience would value these opinions according to how Shakespeare has presented them. Henry is first introduced into the play through the Chorus's speech in the prologue. 'Harry' is described as being 'warlike'. A comparison of him to Mars, the Roman God of war emphasises Henry's military skills and establishes the character as a hero. This first impression of Henry portrays him as being a very powerful man of high status. Throughout the play, the Chorus sets the tone of the conflict as epic and depicts Henry as an epic hero, this is achieved through the eloquent and poetic language used which reinforces the grand nature of events. Act 1 begins with a conversation between the Archbishop of Canterbury and the Bishop of Ely. They start discussing the King, and as the men are alone the audience can assume that they are being sincere. 'The King is full of grace and fair regard / And a true lover of the Holy Church' Canterbury and Ely obviously respect and like the King and he is depicted as a Holy man. ...read more.

He makes fighting with him at Agincourt sound like a privilege, one that will allow its participants to capture more glory than anything else could, he is using a form of propaganda by only showing them one side of the war. Henry goes on to say that he does not want to fight alongside any man who does not wish to fight. But anyone who stays to fight, in the future they will remember with pride the battle on this day: 'This story should the good man teach his son'. Henry also brings up, once more, the motif of the bond between king and commoner. As before the Battle of Harfleur, he unites himself with his men, 'We few, we happy few, we band of brothers.' Henry claims that even a commoner will be made noble by fighting at his side and that the result will be lifelong honour that will elevate these fighters above their peers. He adds that everyone who fights today with the king will become his brother, and all the Englishmen who have stayed home will regret that they were not in France to gain honour in this famous battle as, for this day, class has been erased. Generally, Henry's speeches are structured to impress and persuade his audience but there key moments of reflection as in Act 4, scene 1 in which Henry shows a very introspective side to his personality. ...read more.

The courtship seems to be dictated by rules and strategies and the lack of passion demonstrate how Catherine is being used as a political pawn; she barely understands the language her suitor speaks and as she points out when Henry asks her if she will "have" him, the decision her father's to make. The way that he arranges terms of peace to maximize his own advantage, show that he is a master of political manoeuvring. Henry is shown here as a shrewd politician as he ensures that he is named inheritor of France. Although the way in which Henry treats his future wife and his asking for her Catherine's consent to the marriage could be perceived as Shakespeare reassuring the audience that he will accept his role as a husband with the same commitment and faith with which he has accepted the role of kin and he will respect her. Henry can appear to be a great leader or a cynic who uses the seemingly corrupt, church to justify his actions. In presenting the Henry as a ruthless protagonist, but also the hero of the play, Shakespeare addresses the nature of leadership and its relationship to morality. The play proposes that the qualities that define a good ruler are not necessarily the same qualities that define a good person. Henry is an extraordinarily good leader, he is intelligent, focused, and inspiring to his men. However in becoming a great king, Henry is forced to act in a way that, were he a common man might seem immoral. ...read more.