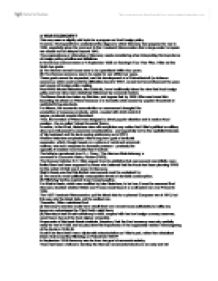 A WAR ECONOMY? This may seem a slightly odd topic for a program on Nazi foreign policy. However, it is imperative to understand the degree to which Germany had prepared for war in 1939, especially given the comment in the Hossbach Memorandum that a large-scale European war should not be delayed beyond 1943. The preparedness or otherwise of Germany needs considering when interpreting the importance of foreign policy priorities and initiatives. In his famous memorandum of 4 September 1936 on Goering's Four Year Plan, Hitler set the Reich two goals: (i) The German armed forces were to be operational within four years; (ii) The German economy was to be ready for war within four years. These goals cannot be separated, and the development of a Wehrwirtschaft (or defence economy), which could avoid the difficulties faced in WW1, cannot but have influenced the pace and course of foreign policy making. Post-WW2 Marxist historians, like Eichholtz, have traditionally taken the view that Nazi foreign policy and war aims were decisively influenced by economic factors. The Mason thesis has taken up this idea, and argues that by 1939 Hitler was forced into launching his attack on Poland because of a domestic crisis caused by popular discontent at restricted living standards. ...read more.

Independent supply departments within the three armed services (eg the Army's Wi-R� Amst. under General Thomas, who loathed and sought to undermine Goering and his officials); and from March 1940... 3. An additional Ministry of Armaments and Munitions under Fritz Todt. Moreover... - Much of the rearmament programme for the German Luftwaffe and Navy was not designed to reach its peak until the mid-1940s - a date in accordance with Hitler's own foreign policy analysis in the Hossbach Memorandum. This helps to explain why Goering was so luke-warm about Germany making any moves against Czechoslovakia or Poland, which might lead to an outbreak of large-scale hostilities in 1938-39. - Hitler had underestimated the problems involved in converting the German economy into one geared to the needs of the military; Industrialists were loath to foresake the lucrative consumer markets for that of the military, and often it took the direct involvement of Goering's army of officials to force them to re-gear their plants. - There were many occasions where resistance from a leading Nazi to taking resources from a pet, prestige project hampered the drive towards a true 'defence economy'. eg Hitler's obsession with the motor-car and the road network meant that it was not until 1942 that Albert Speer was able to persuade him to halt even unnecessary repair work on the Autobahnen. ...read more.

Even Hitler was forced to concede on the eve of war (in a conversation with the League of Nations Commissioner in Danzig, Carl Burckhardt, on 11 August 1939: 'I need the Ukraine so that they cannot starve us out, as they did in the last war.' Nonetheless, Hitler asserted his confidence in Germany's economic ability: 1. To finance a long war Hitler believed that the age-old adage about States being unable to bear the cost of prolonged warfare was erroneous. In a speech to military commanders in May 1939 he argued that the only threat to a modern Power's ability to cope with the demands of prolonged war was the quick destruction of its major industrial regions (eg the Ruhr); 2. To withstand an enemy blockade In his last-minute address to military commanders on 22 August 1939 Hitler claimed not to be even expecting such an eventuality, which would be ineffective anyway: 'because of our autarky and because we have supply sources in Eastern Europe.... There is no need for us to be afraid of a blockade. We will be supplied by grain, livestock, coal, lead and zinc from the east.' In other words, the profits of conquest in the East, in terms of both land and mineral resources would adequately compensate for any weaknesses that were still evident in the German economy at the outbreak of war. ...read more.