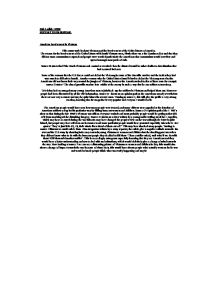 Puja Lodhia 11JHF HISTORY COURSEWORK. American Involvement in Vietnam This coursework is about Vietnam and the involvement of the United States of America. The reason for the involvement of the United States with South Vietnam were, Firstly there was the Domino affect and that they did not want communism to spread and people were worried particularly the Americans that communism would overflow and spread amongst most parts of Asia. Source B states that if the North Vietnam took control or revolted then the situated would be rather similar to that situation that had occurred in Korea Some of the reasons that the U.S forces could not defeat the Vietcong because of the Guerrilla warfare and the tactics they had were much to difficult to handle. ...read more.

However people had been discoursed by all the vile information. Source G shows us an opinion poll on the Americans mood; nevertheless these are not very accurate and may be quite biased in several cases. Turning to source I, this will give the public a very strong reaction, knowing that the magazine is very popular and everyone would read it. The American people would have seen how many people were treated, and many citizens were appalled at the situation of American soldiers acting in this particular way by killing innocent women and children. Source G's opinion poll of the 1960's show us that during the late 1960's Vietnam was still on everyone's minds and most probably people would be getting rather sick of it from watching all the disturbing imagery. ...read more.

indecency towards young Vietnamese women and children but the shocking part was when they did not know what to do with the innocent people they decided to kill them "Then a soldier asked, well what'll we do with them? Kill them said another soldier". This is exceedingly outrageous especially knowing that they are Americans and they would have a better understanding on how to deal with such situations, which would definitely give a change of mind towards the war. Now looking at source J we can see a distressing picture of Vietnamese women and children in fear, this would also show a change of impact towards the war because of visual facts, this would have shown people what actually went on in the war and would of made people think what was really happening and maybe ...read more.