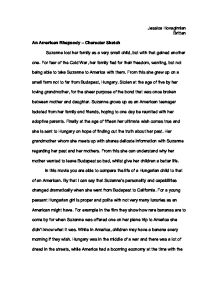 Jessica Hovagimian Britten An American Rhapsody - Character Sketch Suzanne lost her family as a very small child, but with that gained another one. For fear of the Cold War, her family fled for their freedom, wanting, but not being able to take Suzanne to America with them. From this she grew up on a small farm not to far from Budapest, Hungary. Stolen at the age of five by her loving grandmother, for the sheer purpose of the bond that was once broken between mother and daughter. Suzanne grows up as an American teenager isolated from her family and friends, hoping to one day be reunited with her adoptive parents. ...read more.

For example in the film they show how rare bananas are to come by for when Suzanne was offered one on her plane trip to America she didn't know what it was. While in America, children may have a banana every morning if they wish. Hungary was in the middle of a war and there was a lot of dread in the streets, while America had a booming economy at the time with the development of new technologies like television, for Suzanne had never seen a television until she saw herself on the news her first night in America. This shows how differently her life was when she was in Hungary and how much freedom the children have in America. ...read more.

She does this because she is faced with the mystery of her past, leaving her with the mystery of her identity. Only by going back to Hungary, by crossing the border once again, on her own terms, is she able to find herself once again and with this her true home. With the discovery of her past she are able to comprehend what had truly happened and at that make peace with her mother leading her into a deeper understanding for the life she lives and her future. With these attributes to look forward to Suzanne will be able to continue on knowing who she truly is and what she is capable of achieving. She was able to discover the true meaning of family, freedom and home. ...read more.