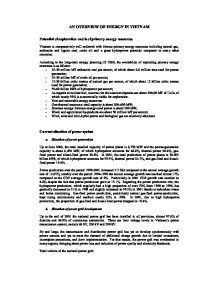 An overview of energy in Vietnam - Potential of exploration and is of primary energy resources.

AN OVERVIEW OF ENERGY IN VIETNAM Potential of exploration and is of primary energy resources. Vietnam is comparatively well endowed with diverse primary energy resources including natural gas, anthracite and lignite coal, crude oil and a great hydropower potential compared to many other countries. According to the long-term energy planning till 2020, the availability of exploiting primary energy resources is as follows: - 25-30 million MT anthracite coal per annum, of which about 6-8 million tons used for power generation; - 25-30 million MT of crude oil per annum; - 15-30 billion cubic meters of natural gas per annum, of which about 12 billion cubic meters used for power generation; - 50-60 billion kWh of hydropower per annum; - As regards to nuclear fuel, reserves for the uranium deposits are about 300,00 MT of U3 O8, of which nearly 50% is economically viable for exploration. - New and renewable energy resources: - Geo-thermal resources: total capacity is about 200-400 MW; - Biomass energy: biomass energy-used power is about 300 MW; - Wood and agricultural by-products are about 50 million MT per annum; - Wind, solar and mini-hydro power and biological gas are relatively abundant. Current situation of power system a. ...read more.

Moreover, as the seasonal flow of Mekong river is relatively even, Vietnam will be able to import power from hydropower projects locating other upstream countries during dry season. Moreover, because the interconnection system with countries having high proportion of thermal power such as Thailand is already set up, in rainy season Vietnam will be able to export hydropower to Thailand, thereby increasing the efficiency of domestic hydropower sector. Vietnam is taking part in several regional projects to conduct a study on a feasible region gird interconnection. On a larger regional scale, the Trans-ASEAN Power Grid Project and Trans-ASEAN Pipeline Project are being considered by the ASEAN member countries, namely Brunei, Cambodia, Indonesia, Laos, Malaysia, Myanmar, the Philippines, Thailand and Vietnam. Another project under study id the power grid interconnection in the Greater Mekong Sub-region (GMS) to set up a unified network in the region. Recently, Vietnam has signed Agreements on Co-Operation in Power with Laos and Cambodia. Following these Agreements, Vietnam will import about 2,000 MW of electricity from Laos, which has abundant hydropower resources under development, and will export electricity to Cambodia (Vietnam will supply electricity at medium voltage to some communities, districts or/and towns of Cambodia close to the Cambodian-Vietnam border. For high voltage supply, Vietnam shall supply Cambodia with up to 80 MW of electric power from 2003 and up to 200 MW from 2005 onwards.) ...read more.