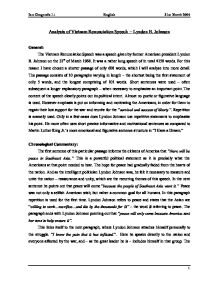 Analysis of Vietnam Renunciation Speech - Lyndon B. Johnson General: The Vietnam Renunciation Speech was a speech given by former American president Lyndon B. Johnson on the 31st of March 1968. It was a rather long speech of in total 4158 words. For this reason I have chosen a shorter passage of only 608 words, which I will analyse into more detail. The passage consists of 10 paragraphs varying in length - the shortest being the first statement of only 5 words, and the longest comprising of 101 words. Short sentences were used - often subsequent a longer explanatory paragraph - when necessary to emphasize an important point. The content of the speech clearly points out its political intent. Almost no poetic or figurative language is used. However emphasis is put on informing and motivating the Americans, in order for them to regain their lost support for the war and reunite for the "survival and success of liberty". Repetition is scarcely used. Only in a few cases does Lyndon Johnson use repetitive statements to emphasize his point. He more often uses short precise informative and motivational sentences as compared to Martin Luther King Jr.'s more emotional and figurative sentence structure in "I Have a Dream." Chronological Commentary: The first sentence of this particular passage informs the citizens of America that "there will be peace in Southeast Asia." This is a powerful political statement as it is precisely what the Americans at that point needed to hear. ...read more.

The speech is launched into a climax with the second short but undoubtedly powerful statement "this I believe very deeply". This sentence leads us back to Lyndon Johnson's opening statement about a free Asia and united America. Though this sentence does not conclude the entire speech it concludes a strong motivational passage from a great political and national leader. Conclusion: Compared to "I Have a Dream" by Martin Luther King Jr, the Vietnam Renunciation Speech was clearly more politically motivated. In "I Have a Dream" a more emotionally-motivated poetic writing style was used. In the Vietnam Renunciation Speech - which used a slightly colder and informative writing style - emphasis was put on the political support required from the nation. The two speeches resemble each other on some points. The aim in both is to reunite a nation - a nation, which is willing to fight for the success and survival of liberty. The speeches were directed to different target audiences, but they both used personal references to reach out to the audience. In "I Have a Dream" Martin Luther King mentioned the affect the black-white dispute had on his own family and children. In a similar way Lyndon Johnson mentioned the troubles he had to endure as the president in a nation scared by war. Another similarity one notices between the speeches is the way they both quoted other great public figures. ...read more.

Tonight I have offered the first in what I hope will be a series of mutual moves toward peace. I pray that it will not be rejected by the leaders of North Vietnam. I pray that they will accept it as a means by which the sacrifices of their own people may be ended. And I ask your help and your support, my fellow citizens, for this effort to reach across the battlefield toward an early peace. Finally, my fellow Americans, let me say this: * Of those to whom much is given, much is asked. I cannot say and no man could say that no more will be asked of us. Yet, I believe that now, no less than when the decade began, this generation of Americans is willing to "pay any price, bear any burden, meet any hardship, support any friend, oppose any foe to assure the survival and the success of liberty." Since those words were spoken by John F. Kennedy, the people of America have kept that compact with mankind's noblest cause. And we shall continue to keep it. Yet, I believe that we must always be mindful of this one thing, whatever the trials and the tests ahead. The ultimate strength of our country and our cause will lie not in powerful weapons or infinite resources or boundless wealth, but will lie in the unity of our people. This I believe very deeply. ?? ?? ?? ?? Ian Chagunda 1.i English 31st March 2006 1 ...read more.