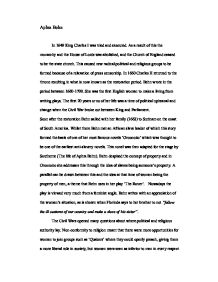 Aphra Behn In 1649 King Charles I was tried and executed. As a result of this the monarchy and the House of Lords was abolished, and the Church of England ceased to be the state church. This caused new radical political and religious groups to be formed because of a relaxation of press censorship. In 1660 Charles II returned to the throne resulting in what is now known as the restoration period. Behn wrote in the period between 1660-1700. She was the first English woman to make a living from writing plays. The first 20 years or so of her life was a time of political upheaval and change when the Civil War broke out between King and Parliament. ...read more.

The Civil Wars opened many questions about where political and religious authority lay. Non-conformity to religion meant that there were more opportunities for women to join groups such as 'Quakers' where they could openly preach, giving them a more liberal role in society, but women were seen as inferior to men in every respect as Angeline Goreau points out in 'Reconstructing Aphra' (1980) "...men had an absolute property in women". For a woman to write for a living was frowned upon in two main ways. The first was that knowledge should be something only men can possess, and the second as pointed out by Goreau - "To publish one's work...was to make oneself "public": to expose oneself to "the world" '. ...read more.

Or at least till I'm so old, I'm fit for nothing else". Between the 1660's and 1670's a 'sexual revolution' took place as Goreau explains - "Charles II's return to the throne...created an atmosphere in which promiscuity, systematic frivolity, and extravagance were adhered to as a social norm...Adultery was part of the calling of a gentlewoman" (Reconstructing Aphra, 1980). This is suggested in 'The Rover' when it is said "I love mischief strangely, as most of our sex do..." Nearly every scene in 'The Rover' has a sexual motivation, e.g. sexual banter between Willmore and Hellena - "I have a world of Love in store - Wou'd you be good-natur'd, and take some off my hands". In 'The Rover' Behn reverses the traditional sexual chase so that the women take the initiative at carnival time. ...read more.