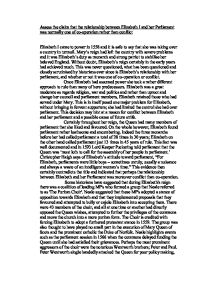 Assess the claim that the relationship between Elizabeth I and her Parliament was normally one of co-operation rather than conflict.

Assess the claim that the relationship between Elizabeth I and her Parliament was normally one of co-operation rather than conflict Elizabeth I came to power in 1558 and it is safe to say that she was taking over a country in turmoil. Mary's reign had left the country with severe problems and it was Elizabeth's duty as monarch and strong patriot to stabilise her beloved England. Without doubt, Elizabeth's reign certainly in the early years had achieved much. This was never questioned, what has been questioned and closely scrutinised by historians ever since is Elizabeth's relationship with her parliament, and whether or not it was one of co-operation or conflict. Once Elizabeth had assumed power she took a rather different approach to rule than many of here predecessors. Elizabeth was a great moderate as regards religion, war and politics and rather than uproot and change her council and parliament members, Elizabeth retained those who had served under Mary. This is in itself posed one major problem for Elizabeth, without bringing in fervent supporters; she had limited the control she had over parliament. ...read more.

Neale highlights events such as the parliament session in 1566 when the commons delayed funding the Queen until she had satisfied their grievances. Perhaps the most prominent aggressors of the choir were the notorious Wentworth brothers; Peter and Paul. Peter Wentworth single handedly attacked the Queen for poor policy making, forwarded proposals for a more puritan English church and claimed that Parliament should have the right to discuss whatever it wished. For his actions, he was rewarded with two stays in the tower, the last of which extended to his death. What is clear however is that the incidents Neale highlights were nothing short of outright conflict between the Queen and her Parliament. There were throughout Elizabeth's reign a number of issues over which she and Parliament disagreed. Elizabeth's marriage was often a sore point between the two and this was not a hidden fact. Many times Parliament discussed her marriage, particularly after the almost life threatening disease that she contracted. These unwanted intrusions by Parliament provoked Elizabeth into rousing speeches about their willingness to confront her authority. In 1566 in response to a parliamentary delegation on her marriage, Elizabeth said, "Was I not born in the realm? ...read more.

Never before had MP's showed opposition in the face of divine monarchy. These individuals were perhaps just testing how much they could flex their proverbial muscles as it were, just seeing how far they could push things. Their actions may have been individually selfish, but could be argued to be the catalyst and original actions that would, during the 17th century, lead to civil war. In the end though, these men were MP's. They lived privileged lives in comfortable surroundings but obviously because of their position as MP's had more say in what happened in England than many other inhabitants of the country did. Elizabeth however was still the Queen of England. This was a case of MP's opposing the Queen on issues they disagreed with, but in the end conforming to a monarch's wishes. These pioneers of liberalism talked the talk but when it came to the crunch, there could only be one victor, and that was the woman who had been chosen by God. Therefore it has to be said that although there were those who opposed Elizabeth in conflict on some points, the majority of MP's however respected their Queen and on the whole co-operated with her. ...read more.