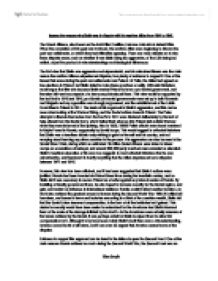 Assess the reasons why Stalin was in dispute with his wartime Allies from 1941 to 1945. The Grand Alliance, also known as the Anti-Hitler Coalition, had one main aim-to defeat Hitler. When the completion of this goal was imminent, the wartime Allies were beginning to discuss the post war settlements, on which they had difficulties agreeing. There are many debates as to why these disputes arose, such as whether it was Stalin being too aggressive, or the USA being too selfish, or just the product of misunderstandings and ideological differences. The first view that Stalin was aggressive and expansionist, and his untrustworthiness was the main reason the wartime Alliance experienced disputes, has plenty of evidence to support it. One of the issues that arose during the post war settlements was Poland. At Yalta, the Allies had agreed on free elections in Poland, but Stalin failed to make these promises a reality. Orthodox historians would argue that this was because Stalin wanted Poland to have a pro-Soviet government, and therefore did want any aspects of a democracy introduced there. This view would be supported by the fact that in 1945 and 1946, pro-Soviet communist governments were set up in both Romania and Bulgaria and any opposition was strongly suppressed, and the establishment of the Lublin Committee in Poland in 1944. ...read more.

With 25 million left homeless, and losses in farms and factories amounting to a third of the countries wealth, Stalin felt that the Soviet Union deserved compensation, in the form of all the territories he'd gained. This desire for security would have been easier to understand for the Americans had Stalin informed them of the scale of the damage inflicted by the Nazi's. As the Americans were actually unaware of the losses suffered by the Soviet, it was perhaps unfair for Stalin to expect them to allow him compensation for it. Although it may have been mainly Stalin's fault there was a misunderstanding, America cannot be rid of all blame, and it can even be argued that America caused some of the disputes. Evidence to support this argument can be found in the failure to open the Second Front. One of the main reasons Russia suffered so much during the Second World War, the Second Front was an issue of great tension between the Allies. Roosevelt originally promised Stalin a second front by 1942, but was advised against this by his military advisors, and so postponed it until 1943. ...read more.

Whilst the issue of the Second Front may have increased mistrust between the Allies, it is undeniable that there was a large mistrust between the two already, based purely on ideological differences between Marxism-Leninism and the Capitalist and liberal democracies of America and Britain. This level of mistrust is shown early on in the Manhattan Project to build the atomic bomb that was later dropped on Japan. The Americans didn't trust the Russians enough to inform them of the bomb, but at the same time, Stalin had a large network of spies operating in America. This suggests that the disputes were caused by a fundamental problem of mistrust within the Alliance, and therefore lends support to the post-revisionist view adopted by many more recent historians. In conclusion, Stalin was in dispute with his wartime Allies from 1941 to 1945 mainly due to the inevitable mistrust between the leaders, causing each country to act selfishly and aggressively, for fear of betrayal from the other side. Whilst there is evidence to support the view that Stalin was aggressive, there is also evidence for America's aggression, yet both acts of aggression can be explained through the lack of trust, born from the ideological differences of the countries. ?? ?? ?? ?? Ellen Smyth ...read more.