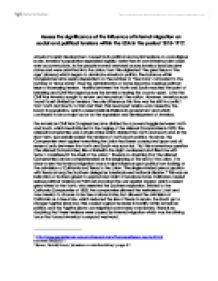 Assess the significance of the influence of internal migration on social and political tensions within the USA in the period 1815-1917.

Assess the significance of the influence of internal migration on social and political tensions within the USA in the period 1815-1917. America's rapid development caused both political and social tensions on a prodigious scale. America's population expanded rapidly, faster than its own infrastructure could ever accommodate. As the people moved westward across America land became states and were admitted into the Union, from this originated 'the great issue of the age' (slavery) which began to dominate American politics. The balance within Congress became purely dependent on the number of 'free state' compared to the number of 'slave states'. Thus the administration of states became a serious political issue of increasing tension. Hostility between the North and South reached the point of breaking and Civil War raged across the America tearing the country apart. After the Civil War America sought to reform and reconstruct the nation. However, America soon found its self divided by tensions, the only difference this time was the shift in conflict from North and South, to East and West. This newfound tension was caused by the boom in population, which caused radical divisions in government and which continued to be a major factor on the expansion and development of America. Pre-American Civil War Congress became divided by a power struggle between North and South, which inevitably led to the forging of the Missouri Compromise in 1820. The Missouri Compromise was a physical line which divided the North and South and, in the short term, successfully eased the tensions of North-South politics. ...read more.

This was due to friction between the North and the South reaching the point where there was no other foreseeable option other than bloody warfare. This came after Secession of the South where states such as South Carolina declared "that the Union now subsisting between South Carolina and other states under the name of the 'United States of America' is hereby dissolved."7 The end result of the war would see the abolition of slavery after a Northern victory. The Civil War was influenced by internal migration both directly and indirectly. Directly, as the migration of slaves into the Northern states affected the outcome of the war due to them joining the fight on the side of the North to crush the men they once called their masters. Indirectly, as internal migration was at the root of every tension, due to the American ideal of expansion which plagued the country and caused constant political and social tensions which inevitably led to the Civil War. Lincoln may not have been influenced by the freedom of slavery as much as he was by the saviour of the Union, but once slaves began to fight for his cause he could no longer ignore them and was forced to take on their cause as a means of both strengthening the Union and weakening the confederacy. The American Civil War was the largest political and social tension in the country's history and was a clear indicator of the tensions that had built up across America, as states were formed due internal migration. ...read more.