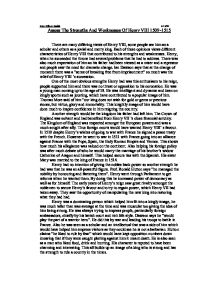 Assess The Strengths And Weaknesses Of Henry VIII 1509-1515

Peter Oliver-Smith 4/11/02 Assess The Strengths And Weaknesses Of Henry VIII 1509-1515 There are many differing views of Henry VIII, some people see him as a scholar and others as a jovial and merry king. Each of these opinions views different characteristics of Henry VIII that contributed to his strengths and weaknesses. Henry, when he succeeded the throne had several problems that he had to address. There was also much expectation of him as his father had been viewed as a miser and a repressor and people saw the need for dramatic change. Ian Dawson says that at the change of monarch there was a "sense of breaking free from imprisonment" so much was the relief of Henry VIII 's succession. One of the most obvious strengths Henry had was this enthusiasm to his reign, people supported him and there was no threat or opposition to his coronation. He was a young man coming up to the age of 18. He was intelligent and dynamic and keen on kingly sports such as jousting, which have contributed to a popular image of him. Thomas More said of him "our king does not wish for gold or gems or precious stones, but virtue, glory and immortality. ...read more.

Also he was seen as a scholar and an intellectual that was a side of him which would have helped him impress visitors as they could see he is not a barbarian. Hutton claims "he liked to rule by fear" which would have kept opposition numbers down knowing that if they were caught plotting against him it meant death. He is also seen as a man who liked food, drink and hunting. His character is reputed to have been charming and interesting. This all builds up an image of a king who is strong and has the strength to rule a country in the times. Although these facts show Henry to be one of the most secure kings of England for quite some time he did have several weaknesses. Henry was not expected to be king and so was not trained and brought up as one who would succeed the throne. It was only known he was next in line to be king of England when he was 11 years old. He was therefore brought up at Elton palace with his mother and sisters. Women for many of the early years of his life surrounded him. After Arthur died Henry was the only male heir to the throne so his father had him well protected so he would survive to be crowned. ...read more.

This created potential trouble, as there was no more the nobles could do if they ever felt the need to stand up to Henry and deposition was now more viable. Over this period of time it can be seen that he did not follow his fathers policies and changed them to suit him and his individual style of ruling. He was less diplomatic on foreign policy and was not afraid to go to an all out war, which he demonstrated. His tactics to the nobles was drastically different, his father had taken away some of their power and decreased the nobility numbers, the opposite of this can be seen in Henry VIII. One thing they were very similar on was the desire to secure the dynasty through a male heir. In 1515 Henry is a king who has made an impression very quickly on England by going to war and being the reverse of his father in financial matters. He is a king who has secured support from powerful figures amongst the English nobles and also amongst the foreign states such as Spain and the Holy Roman Empire. Henry has put himself in a strong position because of this and this is what makes his rule one that stretches over four decades, he did not have great amounts of opposition. ...read more.