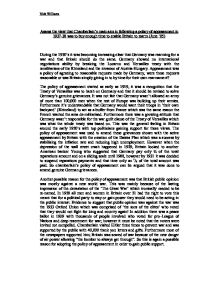 Assess the view that Chamberlain's main aim in following a policy of appeasement in 1937-38 was to buy enough time to enable Britain to rearm (June '05) During the 1930's it was becoming increasing clear that Germany was rearming for a war and that Britain should do the same. Germany showed no international negotiations ability by breaking the Locarno and Versailles treaty with the remilitarises of the Rhineland and the invasion of Austria-Hungary. Appeasement was a policy of agreeing to reasonable requests made by Germany, were these requests reasonable or was Britain simply giving in to by time for their own rearmament? The policy of appeasement started as early as 1919, it was a recognition that the Treaty of Versailles was to harsh on Germany and that it should be revised to solve Germany's genuine grievances. It was not fair that Germany wasn't allowed an army of more than 100,000 men when the rest of Europe was building up their armies. ...read more.

Evidence to suggest that public opinion was against the war was the 1933 Oxford Union which was comprised of 'the sons of the elites' who voted that they would not fight for king and country again! In addition there was a peace ballot in 1939 with thousands of people involved who voted for pro-League of Nations and deep resentment for war; however it must be noted that the voters were invited not compelled. Chamberlain visited Hitler three times to prevent war and was supported by the public with 40,000 thank you letters and gifts. Furthermore most of the newspapers supported him; Britain was scared of war because of the new danger of air power allowing "the bomber to always get through". So this is again a possible reason for adopting the policy of appeasement in order to gain public support. Yet another possible reason for the policy of appeasement is the 'Evils of War'. Chamberlain was a pacifist so obviously keen to avoid war but moreover 750,000 British troops died in The First World War with 250,000 empire deaths with thousands more casualties dieing later from their war wounds. ...read more.

This was a major asset to the defence of Britain and key to the defeat of Germany! In conclusion, I would disagree with the view that Chamberlain's main aim in following a policy of appeasement in 1937-38 was to buy enough time to enable Britain to rearm. Mostly because I don't think appeasement was mainly introduced to buy Britain time to rearm, this was one of the reasons but not the most important. I think that the policy was adopted because of different reasons including the evils of war, public opinion against the war, genuine Germany grievances. Chamberlain publicly admitted he would use all of his power to avoid war, furthermore he was a pacifist this is another key reason for appeasement. I think the fundamental reason for appeasement was the vast majority of people in Britain strongly were against the outbreak of war; because of the evils of war and with former soldiers would now see their children conscripted into the army for a conflict happening hundreds of miles away! ?? ?? ?? ?? Nick Williams ...read more.