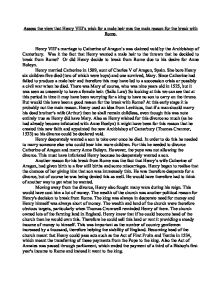 Assess the view that Henry VIII's wish for a male heir was the main reason for the break with Rome.

Assess the view that Henry VIII's wish for a male heir was the main reason for the break with Rome. Henry VIII's marriage to Catherine of Aragon's was claimed void by the Archbishop of Canterbury. Was it the fact that Henry wanted a male heir to the thrown that he decided to break from Rome? Or did Henry decide to break from Rome due to his desire for Anne Boleyn. Henry married Catherine in 1509, aunt of Charles V of Aragon, Spain. She bore Henry six children five died (two of which were boys) and one survived, Mary. Since Catherine had failed to produce a male heir and therefore this may have led to a succession crisis or possibly a civil war when he died. There was Mary of course, who was nine years old in 1525, but it was seen as unseemly to have a female heir. (Salic Law) So looking at this we can see that at this period in time it may have been worrying for a king to have no son to carry on the throne. ...read more.

The king was always in desperate need for money and Henry himself was always short of money. The wealth and land of the church were therefore obvious targets, particularly when Thomas Cromwell reminded Henry of them. The church owned lots of the farming land in England. Henry knew that if he could become head of the church then he would own this. Therefore he could sell this land or rent it providing a steady income of money to himself. This was important as the number of country gentlemen increased by a thousand, therefore helping the stability of England. Becoming head of the church meant that Henry could pass acts such as the Act of First Fruits and Tenths in 1534, which meant the transferring of these payments from the Pope to the king. Also the Act of Annates was passed through parliament, which ended the payment of a third of a Bishop's first year's income to Rome and instead it went to the king. Henry had also fallen for Anne Boleyn, and was deeply in love. ...read more.

Once he realised that the Church was not going to allow him the divorce, he knew there was only really one thing he could do. Evidence that the Church rejected the divorce of Catherine of Aragon was the most important factor for the break with Rome is Anne Boleyn's pregnancy of Anne Boleyn in late 1532. This would probably have made Henry think about ending Papal power and giving himself the power to divorce Catherine and marry Anne; otherwise their expected child would be illegitimate. This would have been unacceptable for an heir to the throne. However, what was the real reason for the divorce? It was the fact that he desperately wanted a male Heir to the thrown. He also liked Anne Boleyn very much, and to marry her, he would need a divorce. Whichever way he looked at it, he needed a divorce desperately. The only thing he could have done was to reform the Church. The main reason for the break from Rome was that Henry needed a male Heir to the thrown and therefore a divorce which was rejected by the Church. ?? ?? ?? ?? ...read more.

There is some consideration of the key explanations here but there is also a great deal of repetition. The conclusion and introduction could both be improved. 3 out of 5 stars.