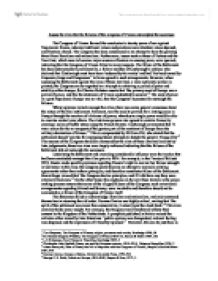 Assess the view that the failures of the Congress of Vienna outweighed the successes.

Assess the view that the failures of the congress of Vienna outweighed the successes The Congress of Vienna formed the conclusion to twenty years of war against Napoleonic France, wherein traditional values and practices were attacked, rulers deposed, and frontiers altered. The Congress has been condemned as an attempt to stem the growing threat from liberalism and nationalism. Furthermore, issues such as those of Turkey and the Near East, which were to become major sources of tension in ensuing years, were ignored; indicating that the Congress of Vienna failed in many respects. The failure of the Settlement has been advocated by Lord Grenville, a fellow member of Castlereagh's cabinet, who declared that Castlereagh must have been 'seduced by his vanity' and had 'his head turned by Emperors, kings and Congresses'1 to have agreed to such arrangements. However, when assessing the Settlement against the aims of those involved, a more optimistic picture is painted; the Congress can be regarded as a triumph in achieving a period of peace and stability within Europe. Sir Charles Webster asserts that 'the primary need of Europe was a period of peace, and this the statesmen of Vienna undoubtedly secured.'2 The need of peace in a post Napoleonic Europe was so vital, that the Congress' successes far outweigh the failures. Whilst opinions varied amongst the allies, there was some general consensus about the nature of the final settlement. Foremost, was the need to provide for a lasting peace in Europe through the creation of a balance of power; whereby no single power would be able to exercise control over others. The victorious powers also agreed to contain France by creating a series of buffer states along the French frontier. Castlereagh commented that 'it was a union for the re-conquest of the greater part of the continent of Europe from the military domination of France.'3 This is compounded by William Pitt, who stated that the settlement should 'provide for repressing future attempts to disturb the general Tranquillity'4 The success of ...read more.

Furthermore, the Prince Regent's abstention hinted at the fundamental weakness of the whole Settlement; the attitude of a country with a parliament and a limited monarchy was different from that of an autocratic Empire such as Russia or Austria, and hence it was going to become increasingly difficult for such countries to co-operate. This Alliance also became a focal point for the suppression of liberalism and nationalism, showing that the failures of the Settlement did outweigh the successes. French historians generally argue that the Vienna Congress provoked the 1830 and 1848 revolutions as it left France feeling weak, henceforth contending the Vienna Congress was a failure, as it failed to achieve its aim of re-establishing order. Gentz believed that the conditions imposed on France were in 'direction opposition to the eternal laws of social progress.'27 Talleyrand commented that 'by the treaty of Paris, France had escaped destruction but she had not the position she ought to occupy in the general political system.'28 This would indicate that the settlement failed as she was deprived of the ability to exercise influence of her neighbours Belgium and Italy, normal for a great power. However, the primary aim was to contain France and so the imposed conditions can be justified. France was also readmitted to the Great Powers Club in 1818, and grievances were not serious. Moreover, Seaman stresses the negative policies of Austria, Prussia and Russia in the years after 1815 is far more at fault than the treaty itself,29 and hence this would suggest that the Congress itself was a success, but it was the policies by reactionary powers after the 1815 arrangements which should be criticised, hence discrediting the view that the failures outweighed the successes. Although there were a number of revolutions in the following decades, there was more stability than instability; the eighteenth century has often been regarded as a period of limited war. ...read more.