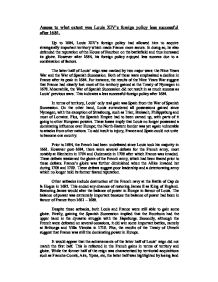 Assess to what extent was Louis XIVs foreign policy less successful after 1684.

Assess to what extent was Louis XIV's foreign policy less successful after 1684. Up to 1684, Louis XIV's foreign policy had allowed him to acquire strategically important territory which made France more secure. In doing so, he also defended the reputation of the House of Bourbon on the battlefield and thus increased its gloire. However after 1684, his foreign policy enjoyed less success due to a combination of factors. The latter half of Louis' reign was marked by two major wars: the Nine Years War and the War of Spanish Succession. Both of these wars emphasized a decline in France after its peak in 1684. For instance, the results of the Nine Years War suggest that France had clearly lost most of the territory gained at the Treaty of Nymegen in 1678. Meanwhile, the War of Spanish Succession did not result in as much success as Louis' previous wars. This indicates a less successful foreign policy after 1684. In terms of territory, Louis' only real gain was Spain from the War of Spanish Succession. On the other hand, Louis surrendered all possessions gained since Nymegen, with the exception of Strasbourg, such as Trier, Breisach, Philippsburg and most of Lorraine. ...read more.

The Dutch opposed him because he had fought them in the Dutch War, which resulted in sever disruption to Dutch trade. German Princes opposed him because Louis had taken land from them via the Policy of Reunion. Leopold also wanted revenge because Louis had "illegally" seized Strasbourg. Compared to the beginning of Louis' reign, the European balance of power has shifted against France; whereas before there was disunity in Europe, now Europe was unified in hatred of France. This unity is very important because it shifts the balance of power against France. Whereas in previous wars France was able to isolate enemies, now she had to fight against the whole of Europe. Previous wars had used up France's resources. Even by 1680 France was already in debt. On the other hand, her enemies enjoyed better provisions for finance, for example the William III was able to borrow money at low rates from of interest from the Bank of England. The minister and generals in the latter part of the reign did not have the same standard as at the beginning. This is particularly true of the army; Villeroi and Villars were mere shadows of their predecessors. ...read more.

Some reasons are more than important than others; for example, the hatred of France from the Policy of Reunion drove other nations together against France and so the power vacuum, which was there at the beginning of the reign, disappeared. However, ultimately it was the combination of these reasons which caused French foreign policy to be less successful following 1688. Unity in Europe alone wouldn't have stopped French aggression. Similarly loss of French resources alone wouldn't have had as much effect had Europe been in disarray. In conclusion, the foreign policy in the latter half of Louis' reign was clearly less successful than pre-1684. In terms of achievements she had secured her status in Europe by acquiring the Spanish Succession, which ensured that she was no longer surrounded by Hapsburgs; Louis had built a Bourbon base in Western Europe which would secure and strengthen both France and Spain. He also left behind a legacy of unprecedented French supremacy during which France was arguably the most powerful country in the world. However, there were failures from his foreign policy as well. The North-Eastern and Eastern frontiers was yet again weakened by the loss of lands which he had worked so hard to acquire before 1684. Furthermore, he left his successor with a Europe united in hatred of France who wanted to curb French power and hegemony. ...read more.