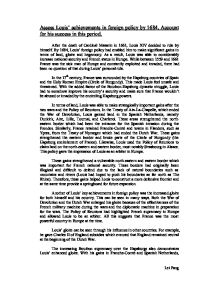 Assess Louis' achievements in foreign policy by 1684. Account for his success in this period. After the death of Cardinal Mazarin in 1661, Louis XIV decided to rule by himself. By 1684, Louis' foreign policy had enabled him to make significant gains in terms of land, gloire and hegemony. As a result, Louis was able to considerably increase national security and French status in Europe. While between 1559 and 1661 France was the sick man of Europe and constantly exploited and invaded, there had been no question of that during Louis' personal rule. In the 17th century, France was surrounded by the Hapsburg countries of Spain and the Holy Roman Empire (Circle of Burgundy). This made Louis feel unsafe and threatened. With the added factor of the Bourbon-Hapsburg dynastic struggle, Louis had to somehow improve his country's security and make sure that France wouldn't be abused or invaded by the encircling Hapsburg powers. In terms of land, Louis was able to make strategically important gains after the two wars and the Policy of Reunions. In the Treaty of Aix-La-Chapelle, which ended the War of Devolution, Louis gained land in the Spanish Netherlands, namely Dunkirk, Aire, Lille, Tournai, and Charleroi. These areas strengthened the north-eastern border which had been the entrance for the Spanish invasion during the Frondes. ...read more.

Therefore, it would appear that the enhanced gloire was the most important achievement of Louis' actions between 1661 and 1684. France was able to achieve this success by a combination her strengths and the weaknesses of her enemies. Cardinal Mazarin had won peace with the Holy Roman Emperor through the Peace of Westphalia and Spain via the Treaty of the Pyrenees. The Thirty Year's War had exhausted both Spain and the Holy Roman Empire. Spain had suffered from decades of total warfare meanwhile the Holy Roman Empire faced permanent threat from the Turks in the East. This implies that France's two greatest rivals could not counter her. Meanwhile other countries also had other problems. For example, Charles II of England wanted to secure his standing at home without running into difficulty with his parliament, especially over money. So Louis gave Charles money which ensured English support. Sweden was in a period of Regency which meant that it was vulnerable. In the United Provinces, there was tension between the two parties. This meant other powers in Europe could not oppose France's actions. Overall, France had made associations with other powers in Europe which restricted them from allying with the Hapsburg powers even though Spain was already declining and the Treaty of Westphalia had ended the growth of the Holy Roman Empire. ...read more.

This suggests that Europe was becoming united against France, which could harm France's international situation in the future. Before France had used the Protestant powers to keep the Hapsburgs in check, whereas now the Hapsburgs are using the Protestant powers to restrain France. Although all these setbacks were important, it would appear that the creation of anti-French coalitions was the most important setback to Louis. These alliances had already revealed how Louis' ambitions could be limited. Plus, they had also brought unity in Europe which diminished the power vacuum in Europe and France's ability to be an arbiter. Other setbacks, such as resentment from other states, were not as important because they did not affect France's future as much as the anti-French coalitions. In conclusion, Louis' gains during these years are of unquestionable greatness. He had strengthened a nation, in the middle of a warlike race while being surrounded by jealous enemies, by acquiring land in weak areas and increasing his influence in other states. However, this greatness came at a huge cost to France's international status in the future. Due to the manner of his acquisitions, other powers had come together and formed anti-French coalitions. This meant that France had more challenges facing her in the years to come, if she were to retain her standing in Europe. ?? ?? ?? ?? Lei Pang ...read more.