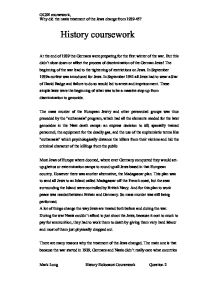 At the end of 1939 the Germans were preparing for the first winter of the war. But this didn't slow down or affect the process of discrimination of the German Jews!

History coursework At the end of 1939 the Germans were preparing for the first winter of the war. But this didn't slow down or affect the process of discrimination of the German Jews! The beginning of the war lead to the tightening of restrictions on Jews. In September 1939a curfew was introduced for Jews. In September 1941 all Jews had to wear a Star of David Badge and failure to do so would led to arrest and imprisonment. These simple laws were the beginning of what was to be a massive step-up from discrimination to genocide. The mass murder of the European Jewry and other persecuted groups was thus preceded by the "euthanasia" program, which had all the elements needed for the later genocides in the Nazi death camps: ...read more.

However there was another alternative, the Madagascar plan. This plan was to send all Jews to an Island called Madagascar off the French coast, but the seas surrounding the Island were controlled by British Navy. And for this plan to work peace was needed between Britain and Germany. So mass murder was still being performed. A lot of things change the way Jews are treated both before and during the war. During the war Nazis couldn't afford to just shoot the Jews, because it cost to much to pay for ammunition, they had to work them to death by giving them very hard labour and most of them just physically dropped out. ...read more.

The Nazis had to save money for the war aid for example ammunition and rations. So because they had to save money once the chamber was opened again every one was dead but they where so tightly squeezed together they were holding each other up. Another reason why the treatment changed so rapidly from discrimination to genocide is the public speech for Hitler. Hitler said before the outbreak of the war that if there were another war, he would annihilate the Jews. He said during the war that he was in the process of annihilating the Jews. And he said in his Testament that he had done exactly what he had said he would do. GCSE coursework, Why did the nazis treatment of the Jews change from 1939-45? Mark Long History Holocaust Coursework Question 2 ...read more.