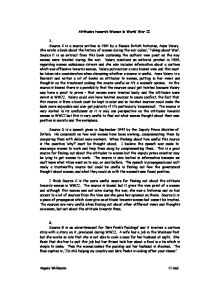 Attitudes towards Women in World War II 1. Source C is a source written in 1991 by a female British historian, Anne Valery. She wrote a book about the history of women during the war called, 'Talking about War'. Source C is an extract from this book containing the authors view point on the way women were treated during the war. Valery mentions an editorial printed in 1939, regarding women ambulance drivers and she also includes information about a cartoon which was offensive towards women. Valery puts across a very biased view and this must be taken into consideration when discussing whether a source is useful. Anne Valery is a feminist and writes a lot of books on attitudes to women, putting in her views and thoughts on the treatment making the source useful as it's a women's opinion. As the source is biased there is a possibility that the sources could get twisted because Valery may have a point to prove - that women were treated badly and the attitudes were sexist in WWII. Valery could also have twisted sources to cause conflict, the fact that this source is from a book must be kept in mind and so twisted sources could make the book more enjoyable and also get publicity if it's particularly 'scandalous'. ...read more.

WWI hadn't really brought changes for women, some worked but not to the extent that they did in WWII. WWII did not necessarily bring about actual changes but it changed the way women thought and were thought about. The war created working opportunities for women that had never been explored before. Women were expected to sit at home looking after children, cooking and cleaning before the war. Those that could work, which was anyone without a child, could only work in textiles factories and work with children. When the war started millions of men were sent away to fight leaving their jobs and family behind. Women played a major part in the war as they were sent to work in place of all the men that had left for war. Any job was filled, including working on busses and in the munitions factory and this was dangerous work for anybody, which needed a lot of skill; women were paid up to �10 a week. Source F reads, "My first impression of this great all male domain was not a good one, (it) awed and scared me." ...read more.

She has no reason to lie, but her memory may be a bit vague, although something as important as the attitude towards her is unlikely to be forgotten. What made it even harder to believe was the fact that most of the women that went away to the country had no previous experience with country land or animals. Women who were sent to work the land had no choice where they were to go; they were billeted to remote areas in basic conditions with low pay. Although the conditions were bad the women learnt new tasks and gained new experiences and new respect. In conclusion I agree with the statement, that the WWII created big changes for the women in Britain. During the war, women were given the chance to prove themselves to men, showing that they could do any job men could do and in some cases-better. It also gave women a chance to become more independent; women went away, for the first time in many cases, to work on the land or in the armies. They gained new independence and experience. By the end of the war, although women were pushed out of their jobs, they had gained a respect which was a step in the ladder to equality. ?? ?? ?? ?? Angela Wilkinson 11 Hall ...read more.