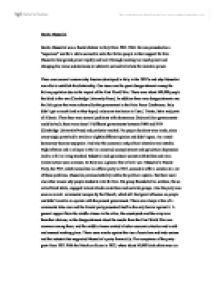 Benito Mussolini Benito Mussolini was a fascist dictator in Italy from 1925-1944. He was presented as a "superman" and for a while seemed to unite the Italian people in their support for him. Mussolini had gained power rapidly and lost it through wanting too much power and changing his views and decisions to whatever seemed to be best for maintain power. There were several reasons why Fascism developed in Italy in the 1920's and why Mussolini was able to establish his dictatorship. One issue was the great disappointment among the Italian population due to the impact of the First World War. There were about 500,000 people that died in the war (Cambridge University Press). In addition there was disappointment over the little gains that were achieved by the government in the Paris Peace Conference. Italy didn't get as much land as they hoped, only some territories in Tyrol, Trieste, Istria and parts of Albania. Then there were several problems with democracy. Only coalition governments could be built, there were about 31 different governments between 1860 and 1914 (Cambridge University Press) and paralysis resulted. No proper decisions were made, since every single party held a totally or slightly different opinion and didn't agree. As a result democracy became unpopular. And also the economic and political situation was instable. High inflation and a collapse in the lira occurred, unemployment and agricultural depression lead to a fall in living standard. Industrial and agricultural unrests with strikes and even violent action were common. ...read more.

As nearly all the dictators Mussolini put great emphasis on military strength, because his purpose was, similar to Hitler's with Germany, to make Italy self-sufficient and independent and therefore designed his economic policies to achieve this. For example he imposed taxes of foreign goods, so only the countries own goods would be bought and Italy therefore would be self-sufficient. In order to stay in power Mussolini used certain policies, tried to built up economy, create an image as a "superman", used propaganda and avoided disagreements with the Vatican. Mussolini set up his own secret police, the OVRA and enforced press censorship to make sure no anti-Fascist articles were published. To weak the King's position, although he already stayed away from all domestic policies and it was certain he wouldn't overthrow the Fascists, Mussolini limited the King's right to choose the Prime Minister from only a list complied by the Fascist Grand Council which decided policy without consulting any of the non-fascists in the government first. Mussolini wanted to change Italian society and the Italian character. He wanted the economy to be able to serve a war with self-sufficiency, and the citizens to be disciplined and warlike. This is very common in a dictatorship, since most dictators want to have a to them loyal population and an independent state, Mussolini wasn't any different. He organised the economy in a Corporate State, as he wanted to increase the influence of the state without destroying capitalism. ...read more.

In 1929 Mussolini made a treaty with the Catholic Church, the concordat, which made the catholic faith the state religion. All this ensured Mussolini the support from the people and made him very popular. Mussolini remained with quite a lot of support till the success of the Second World War became less. When Mussolini declared war on Britain and France he had to learn that his armed forces were not very successful. In 1943 Italy was invaded and Mussolini overthrown. The Grand Council removed him from his position as head of government and Fascism in Italy ended. Mussolini was arrested but then rescued by German paratroops. When he was arrested again local communist partisans lynched Mussolini and his mistress and their bodies hung upside down in the street. In conclusion Benito Mussolini was a leader, whose ambition to gain and maintain power influenced all his politics. He was ready to change his viewpoints and actions all the time, to make it fit to what seemed most popular or to give him most power. He changed from more socialist views to Fascism, tried to have good connection to the church, just to get more support, not in his personal interest, and after already having decided to stay out of the war he later joined it on Hitler's side, as that seemed to promise success and more power. However, this ambition in the end lead to his downfall, as Hitler's influence made him begin to persecute Jews, and people refused. Also they started to realise that his propaganda was fake and his policies and plans didn't work out, although he pretended they would. ...read more.