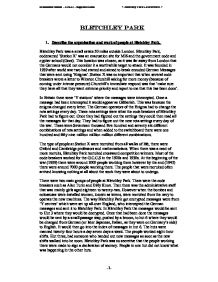 Bletchley Park 1. Describe the organisation and work of people at Bletchley Park. Bletchley Park was a small estate 50 miles outside London. Bletchley Park, codenamed 'Station X' was an evacuation site for MI6 and the government code and cypher school (Gccs). This location was chosen, as it was far away from London that the Germans would not consider it a worthwhile target to attack. It was founded in 1939 after world war two had started and aimed to break encoded German Messages that were sent using 'Enigma'. Station X was so important that when several code breakers wrote a letter to Winston Churchill asking for more money (because of coming under intense pressure) Churchill's immediate respond was that 'make sure they have all that they want extreme priority and report to me that this has been done'. In Britain there were 'Y stations' where the messages were intercepted. Once a message had been intercepted it would appear as Gibberish. This was because the enigma changed every letter. The German operators of the Enigma had to change the rota settings every day. These rota settings were what the code breakers of Bletchley Park had to figure out. Once they had figured out the settings they could then read all the messages for that day. They had to figure out the new rota settings every day of the war. ...read more.

All this was one heck of a job for the code breakers they needed a system whereby the codes could be decoded much quicker. One man, a mathematician, John Herivel, found the solution. Since he was a mathematician he looked at words in exactly the same way as he looked at number patterns and used the 'crossword puzzle' method to find a way of working out what the wheel settings were likely to be each day. For Herivel's idea to work he needed the first messages of the day from as many operators as possible. If they were similar they would give away the settings for the day. However this idea was not effective until after the German invasion of Denmark and Norway. As the war got intensive every effort was made to find a way of cracking Enigma more effectively, which resulted in the construction of the 'first bombes', which were another of Alan Turing's ideas. The 'bombes' were nicknamed 'Victory' that was installed on 1 march 1940 and 'Agnes' began work on 8 August. They were electric machines that each contained thirty cylinders and tried to speed up the decoding of messages. For the machine to be of any use the code breaker needed to input a clue into the 'bombe' which would then look for a related message. ...read more.

If Germany were successful in preventing merchant ships carrying food/ammunition/raw materials from North America to England, then the ending of WW2 would have been dramatic. England would have been starved into submission and taken over by Hitler, which would have resulted in the continuous persecution of Jews. Fortunately that was not the case and thanks to Bletchley Park "Dolphin" was cracked and by November 1941, the number of ships being sunk dropped from 282,00 tonnes to 62,000. However, in 1942 Germany was back in control with the introduction of "Shark" but it was not to last. In December 1942 Bletchley Park cracked 'Shark' and the outcome of this was that within the first five months of 1943 the allies had sunk more than 100 U-boats. In short, it could be said that Bletchley Park provided the groundwork for all the events that took place in the war, without this intelligence the war would have been lost in early 1940's. The whole of England and the allies were relying on Bletchley Park to find a gap within the enemies codes and like in maths, once you find a way into working out a calculation there is no going back, there is always a chance of progressing further as Bletchley Park did. Bletchley Park was the reason behind the defeat of the Axis in Europe, and Africa in "The battle of El Alamein". Mohammed Shuaib - 11NGO - Sapphire House < Bletchley Park Coursework > -1- ...read more.