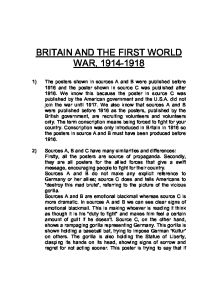 BRITAIN AND THE FIRST WORLD WAR, 1914-1918 1) The posters shown in sources A and B were published before 1916 and the poster shown in source C was published after 1916. We know this because the poster in source C was published by the American government and the U.S.A. did not join the war until 1917. We also know that sources A and B were published before 1916 as the posters, published by the British government, are recruiting volunteers and volunteers only. The term conscription means being forced to fight for your country. Conscription was only introduced in Britain in 1916 so the posters in source A and B must have been produced before 1916. 2) Sources A, B and C have many similarities and differences: Firstly, all the posters are source of propaganda. Secondly, they are all posters for the allied forces that give a swift message, encouraging people to fight for their country. Sources A and B do not make any explicit reference to Germany or her allies; source C does and tells Americans to "destroy this mad brute", referring to the picture of the vicious gorilla. Sources A and B are emotional blackmail whereas source C is more dramatic. In sources A and B we can see clear signs of emotional blackmail. This is making whoever is reading it think as though it is his "duty to fight" and makes him feel a certain amount of guilt if he doesn't. ...read more.

Because of this and the fact that the language he employs is emotive and poetic the image of war may be depicted with more horror and description. As Siegfried Sassoon, who writes the passage, strongly detests war, the passage will be highly bias. All together, the two sources give different impressions of what the conditions of the trenches are like because they were used for different purposes: source I used the nations patriotism to sell a product, whereas source J describes the conditions of the trenches so horribly because the writer hates war and wants other people to be shocked into hating it too. 7a) Sources E, F and G are not at all reliable as they purposefully give people at home the wrong impression of what life in the trenches was like. Source E shows a postcard that soldiers were allowed to send home to family and friends. It is very restrictive in what they can say, with it in fact being more of a multiple choice type card. This would have been because the British government did not want anyone at home to know the true reality of the conditions in the trenches, in order to maintain high spirits. The same is true of source F. The picture shows the East Surrey Regiment playing football in No Mans land. This could not be further from the truth, yet people at home would believe it. ...read more.

The government would not let the public know the reality of war and would only give them exaggerated good points and no bad points to keep moral high. That is why I agree with the statement: "The British government did everything it could to mislead the British public about what it was really like in the trenches." 9) I believe that a historian writing about the trenches in 1918 would have produced a different account to a historian writing on the same topic today. Sources A, B and C all give the impression that war was a good thing. Source E shows all the reality of war a historian at that time would have to go on. Articles in the newspaper, shown in sources F and G are all a historian would have to write about. These articles are of course not giving the whole picture and exaggerating the good points. Sources H and J are real accounts of what war was actually like. However these were written many years after the war and would therefore be no use to a historian in 1918. As the press were not allowed to print any article on the reality of war such as 'Dulce et Decorum est' by Wilfred Owen, and the government were misleading everyone, a historian in 1918 would have as much genuine information as the public, which is not a lot. Because of this, a historian writing today, who had all the information, would write a different account to a historian writing in 1918 who had inaccurate information. ...read more.