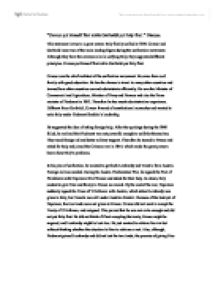 "Cavour put himself first while Garibaldi put Italy first." Discuss. This statement is true to a great extent. Italy finally unified at 1870. Cavour and Garibaldi were two of the main leading figure during the unification movement. Although they have the common aim in unifying Italy, they supported different principles. Cavour put himself first while Garibaldi put Italy first. Cavour was the chief architect of the unification movement. He came from well family with good education. He has the chance to travel to many other countries and learned how other countries run and administrate efficiently. He was the Minister of Commercial and Agriculture, Minister of Navy and Finance and also the Prime minister of Piedmont in 1852. Therefore he has much administrative experience. Different from Garibaldi, Cavour favored of constitutional monarchy and wanted to unite Italy under Piedmont Sardinia's leadership. He supported the idea of asking foreign help. After the uprisings during the 1848 failed, he realized that Piedmont was not powerful enough to unify by themselves. They need foreign aid and better military support. Therefore he turned to France and asked for help and joined the Crimean war in 1854, which made the great powers knew about Italy's problems. In his plan of unification, he wanted to get back Lombardy and Venetia from Austria. ...read more.

He believed in peace and stability. He did not agree with Garibaldi's conquest in the South. When Garibaldi was getting more powerful and influential after the success in the conquest of the Two Sicilies, Cavour became jealous and fear. Firstly, because if Garibaldi gained power, he might make Italy a Republic based on a system of universal suffrage and spoilt Cavour's dream of uniting Italy under Piedmont leadership. Piedmontization was more what he wanted. Secondly, it might be threatened with the lost of Napoleon III's support, with a renewal of war with Austria, and if the war endangered the pope, it might led to some sort of general European intervention. Therefore, Cavour needed to stop Garibaldi's invasion in Rome and Papal State. Thirdly, if Garibaldi succeeded in Sicily it seemed likely that Radicalism would go on to sweep Naples and the Papal Stated and threaten to divide Italy between a Radical republican south and Liberal monarchial north. He did not help Garibaldi in the conquest of the Two Sicilies in order to get him out of the way and in the hope that failure would ruin the radicals once and for all, as he could not openly opposed Garibaldi as this might arose the opposition of the nationalists. ...read more.

After all the conquests, Garibaldi was a loyal and patriotic servant who put Italy first. He knew that his power was not big enough to really united Italy into a Republic. If he went on to attack Rome, Cavour who supported constitutional monarchy would opposed to it and might lead to a Civil War between Garibaldi and Piedmont Sardinia in the future as they supported different political systems. He accepted advise of Cavour and did not attack Rome. By this, Italy avoid direct confrontation with France. He also retired after this incident, at the climax of his career. Handed his lands which he conquered earlier to Victor Emmanuel and retired to become a farmer in a lonely inland. He did this was just because he put Italy first. He did not want to see Italy weaken because of a civil war. Also wanted to prevent direct conflicts with Cavour. To him, as long as Italy could be unified and strong , it was not a matter that Italy became a Republic or constitutional monarchy. In conclusion, Garibaldi was really a hero, as he fought for Italy but not for himself and was not power-minded. Although Cavour put himself first, and did not aimed at unifying Italy as a whole, he did really helped in this movement. Without his plan and advise, Italy might not be unified successfully. ...read more.