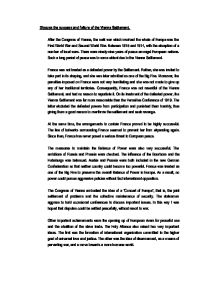 Discuss the success and failure of the Vienna Settlement.

Discuss the success and failure of the Vienna Settlement. After the Congress of Vienna, the next war which involved the whole of Europe was the First World War and Second World War. Between 1815 and 1914, with the exception of a number of local wars. There were ninety-nine years of peace amongst European nations. Such a long period of peace was to some extent due to the Vienna Settlement. France was not treated as a defeated power by the Settlement. Rather, she was invited to take part in its shaping, and she was later admitted as one of the Big Five. Moreover, the penalties imposed on France were not very humiliating and she was not made to give up any of her traditional territories. Consequently, France was not resentful of the Vienna Settlement, and had no reason to repudiate it. On its treatment of the defeated power, the Vienna Settlement was far more reasonable than the Versailles Conference of 1919. The latter excluded the defeated powers from participation and punished them harshly, thus giving them a good reason to overthrow the settlement and seek revenge. ...read more.

Germany and Italy were divided; parts of their territories were dominated by Austria and other powers. However, the peoples under these rulers considered that the monarchs had no right to dispose of them and their country as their country as they pleased. Where a foreign government was installed, the struggles of the future were to fight for self-determination. As a result, revolution and unification movements appeared throughout Europe after 1815, causing general unrest. The Vienna Settlement was drawn up by the great powers and mainly served their interest, ignoring the interest of smaller states. For example, Sweden was made to give up Finland to Russia; Belgium was made to unite with Holland; Lombardy and Venetia were given to Austria. These arrangements would certainly cause trouble in the future. The statesmen also underestimated the tension generated by religious differences. For example, Catholic Belgium was farced to unite with Protestant Holland. This resulted in conflict between these two people over the next fifteen years. Catholic Poland was placed under the rule of the Russian Czar, who headed the Eastern Orthodox Church. Russian domination was bitterly resented by the Poles. Username: b0011222 ...read more.