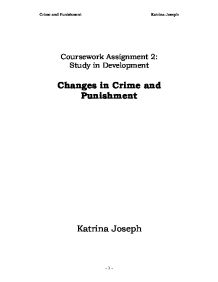 Coursework Assignment 2: Study in Development Changes in Crime and Punishment Katrina Joseph Changes in Crime and Punishment. (a) Between the mid-seventeenth century and the mid-eighteenth century attitudes to witchcraft in Britain changed. Source A is a mid-seventeenth century engraving that shows the swimming test of a woman accused of witchcraft. The accused would be submerged in water, and if they rose to the surface they were assumed guilty. 'Evidence' of witchcraft was not difficult to find. Certain types of marks on the body would be enough, since these were supposed to be caused by witches feeding their 'familiars' (cats, toads, birds or hogs, as in source A) with their own blood. The onlookers of the swimming test in source A are watching the trial with expressionless faces. Local crowds would often take matters concerning witchcraft into their own hands and apply the old fashioned 'swimming test'. To them it was not considered murder, it was simply a noble act on their part; ridding the community of evil. There is a man passing by the test in the engraving. He has no interest in the activities taking place around him, which probably means that these scenes were not unusual in rural areas such as the one in source A. During the seventeenth century the rise in prices, the changing patterns of land use and the political upheaval (Civil War) led to widespread poverty. Faced with difficult times ahead, many people became more and more superstitious. They look for simple reasons for thing that went wrong and evil and the devil were to blame. ...read more.

items, such as drugs, guns and stolen goods, that do not benefit many people. The smuggling of people is also becoming a routine for smugglers. This is a highly illegal and dangerous business with the trade in illegal immigrants worth more than $30 billion a year, it has become a lucrative market for organised crime syndicates. More than 20,000 people were caught being smuggled into the UK last year but authorities believe many more made it through. In the eighteenth century the punishment for smuggling was in general very harsh, although it depended on the amount and value of the goods bought. Often, if a smuggler did not surrender immediately they were shot. Many people felt sorry for smugglers because they were seen to be helping and doing good for others, yet their punishment was so harsh. But smuggling was a big problem to the government in the eighteenth century. It threatened to deprive them of money that they needed to carry out their normal tasks. The death sentence was often imposed as a deterrent to others. Now in the twentieth century, capital punishment does not exist, so smugglers are usually imprisoned as a punishment. The sentence depends upon the nature of the goods smuggled. Smuggling is now on an international scale. In the eighteenth century, small boats bought in the goods at night. Items were only smuggled in from nearby countries, not continents as in the twentieth century. The advance in technology has brought about a lot of changes in the crime of smuggling. Metal detectors and x-ray machines have meant that certain goods are harder to smuggle in. ...read more.

The thought of people existing in such dreadful conditions in prisons, as described by John Howard in his report on the State of Prisons in England and Wales, provoked great public sympathy. Britain was generally becoming more caring, and the government was forced to notice this and act upon it. (e)i. Elizabeth Fry was a great contributor to the history of prison reform. As early as 1813, Elizabeth began to make several visits to Newgate, where a fellow-Quaker introduced her to the conditions in which women prisoners were kept in the prison. Newgate was a prison which held both men and women awaiting trial, sentencing, execution, and transportation. Elizabeth found women and children living and dying in conditions of horror, filth, and crulety and resolved to do something about it. Firstly, she visited the prisons and encouraged other middle class women to do so, overcoming official opposition and setting up education classes for women. She was ahead of her time in the way she treated the prisoners as human beings. Elizabeth did not impose discipline on them but instead proposed rules and invited the prisoners to vote on them, and she put an educated prisoner in charge. Secondly, Elizabeth told people in the outside world about prisons. She used her connections in high places to good effect (despite her religious principles she enjoyed high society). Both Florence Nightingale and the young Queen Victoria admired Elizabeth for her compassionate exercise outside the home. She was the figurehead of philanthropic endeavour in this country and today is regarded as one of the early feminists. The successes of her methods at Newgate impressed the government and were tried in other prisons. Crime and Punishment Katrina Joseph - 1 - ...read more.