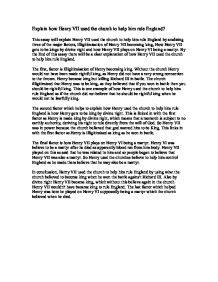 The second factor which helps to explain how Henry used the church to help him rule England is how Henry gets to be king by divine right. This is linked in with the first factor as Henry is made king by divine right, which means that a monarch is subject to no earthly authority, deriving his right to rule directly from the will of God. So Henry VII was in power because the church believed that god wanted him to be King. This links in with the first factor as Henry is illigitimised as king as he won in battle. ...read more.

So Henry used the churches believe to help him control England as he made them believe that he may also be a martyr. In conclussion, Henry VII used the church to help him rule England by using what the church believed to become king when he won the battle agains't Richard III. Also by divine right Henry VII became king, which without this believe again in the church Henry VII wouldn't have became king to rule England. The last factor which helped Henry was how he played on Henry VI supposedly being a martyr which the church believed when he died. ...read more.